A collection of dresses, fans, parasols and dolls that once belonged to a leading light of Britain’s suffrage movement will be offered for sale at Brightwells in Leominster on April 20th.

Priscilla Bright McLaren was at the forefront of the women’s movement long before the Pankhursts and the other hunger strikers of the early 20th century became involved. Married to the Liberal M.P Duncan McLaren, who was also Lord Provost, she was at the forefront of intellectual Scottish society and ideally situated to make her voice heard. In 1867 she became the first president of the Edinburgh Society for Women’s Suffrage and was a leading speaker at the 1882 Glasgow Suffrage Demonstration. 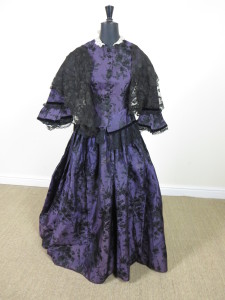 The auction features a large wax doll she owned as a child as well as the fans, parasols and dresses, such as a purple and black brocaded silk formal dress and accessories she wore at an afternoon reception at Holyrood 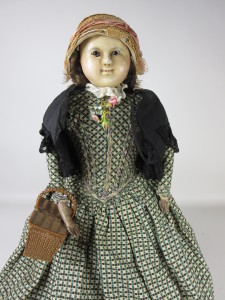 Palace in 1853 at the time when her husband was Lord Provost. Her bonnet with its lace veil and her folding parasol and other items from her wardrobe have been displayed at several museums and Exhibitions in Scotland, as has an interesting red cloak that has been in the family since the 17th century.

Born in 1815, Priscilla was the sister of John Bright, the Quaker, radical and Liberal statesman, who also campaigned for the suffrage movement. Priscilla was sent to Quaker schools and later, with her sisters, ran a school to teach reading and writing to her father’s factory girls. By the 1840s she was involved with Votes for Women. In 1848 she became the third wife of Duncan McLaren, an action that caused her to be disowned by the Quakers for marrying out. 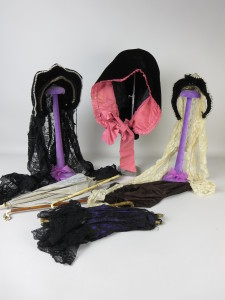 Priscilla became a member of the Edinburgh Ladies Emancipation Society and subscribed to the Married Women’s Property Campaign. In 1869 she was supporting female entry to the medical profession and belonged to the National Association for the repeal of the Contagious  Diseases Act. In 1866 she signed the women’s suffrage petition and in 1871 attended the Women’s Suffrage Conference in London and moved the principal motion requesting Gladstone’s support. From the Lancashire factory women alone the suffragists raised a petition of 30,000, a great achievement that reflected  the more independent attitudes of late 19th century women.