Skip to content
Auctions Fashion & Textiles Vintage
April 12, 2016 admin 0 Comments Hansons, vintage, vintage fashion
Hansons Auctioneers are preparing for their forthcoming Vintage Costume & Textiles auction in May, which will feature examples of clothing and accessories from across the globe.

A highlight of the auction includes a pair of nineteenth century late Qing dynasty scent purses, which are hand embroidered on black silk and feature a wave design of colourful silk flosses and Chinese symbols. The purses have a pleated and drawstring opening, each with a silk cord decorated with four green carved clay beads. These purses would have been suspended from a sash like belt worn around the waist of a man’s court coat (estimate £200-300).

Hansons textile valuer Eppie Evans said, “The scent purses are in good condition and will hopefully attract lots of interest from collectors worldwide.” 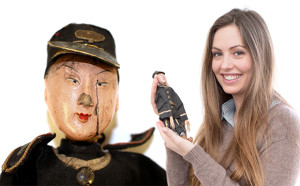 There are a number of other Oriental pieces in this sale, including some nineteenth century lotus shoes, and a mid-nineteenth century Chinese bisque figure modelled as a policeman, fitted with a truncheon and original clothing, 26 cm (estimate £200-300).

The sale will also include some pieces of European costume; amongst them a 1920’s black silk chiffon dress with matching jacket, with lace and diamanté detail (estimate £80-120) and a golden yellow ribbed silk two-piece trained gown with cream silk gauze ruffles by Owen Owen Liverpool, c.1900. (£90-120). There is also a mid-nineteenth century men’s cream silk waistcoat with a shawl collar

(estimate £50-80) and a rare hollie point knitted red silk panel made for the anticipated coronation of King Edward VIII in May 1937 (estimate £40-60).

Hansons are still welcoming entries for the sale on Monday 23rd May, with the deadline of 27th April.