A collection of antique furniture, pictures and ceramics from the home of Liberal Democrat peer Lord John Lee of Trafford and his wife attracted bidders from around the globe at a collective country house auction by Halls recently.

Around 150 lots from the 18th century Grade II Listed Bowdon Old Hall, Bowdon, near Altrincham formed the heart of the auction. 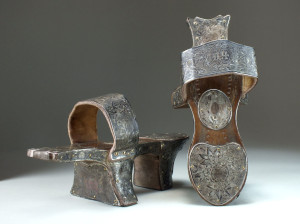 Several lots reflected the Armenian heritage of Lady Lee and the auction followed the family’s decision to move home. Among the star lots was a pair of late 18th century or early 19th century Turkish silver mounted wooden shoes which sold above estimate for £1,650. 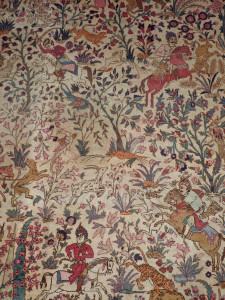 Japanese and Chinese works of art performed well, with a Japanese Satsuma pot and cover by Kozan making £480 and a Chinese famille verte style vase and matched cover selling for £400. Closer to home, an early Worcester porcelain fluted coffee can dating to 1754-’55 sold for £460 and a mid-19th century sycamore treen six section spice tower made £550.

Heading the entries from other country houses were a 19th century boulle style and ebonised serpentine fold-over card table at £1,650, an early 18th century oyster veneered walnut chest which found a new home at £1,550, a 1770 George III carved and painted pine chimney piece from Hardwick Grange, Shropshire at £1,500 and a mid-18th century walnut veneered lowboy at £1,480.

Consigned from a deceased estate near Plymouth were two marine oil paintings by Arthur Wilde Parsons (1854-1931) – Leaving Carrick Roads 1902 off St Anthony Light Falmouth and Newquay, ship and boats in the harbour, fisherfolk on the quay – which sold for £1,350 and £750 respectively.

Lots of bidders were in the hunt for a Copeland and Garrett porcelain hound head stirrup cup, which sold for £600. A mid-19th century Baccarat Millefiori paperweight and a Victorian copper commemorative mould set by Temple and Crook weighed in at £650 each and a 20th century Chinese export lacquer box and cover, a ‘faience’ charger by Joseph-Theodore Deck (1823-’91) and an early 19th century Wedgwood blue and white foot bath sold for £500 each.

Halls’ senior auctioneer and valuer, Andrew Beeston described the auction as “a snapshot of country house living and interiors from the last three centuries, focusing on quality furniture, ceramics and pictures”.

He revealed that 330 online bidders from all four continents were registered, which was a record at Halls for this type of auction. More than half the lots were either bought or underbid by online bidders.

“From the volume of enquiries for two weeks prior to the auction and the number of people viewing, we had an inkling that we were going to have a good day,” he said. “Buyers like fresh-to-the-market items from private homes and our new format of mixed catalogue auctions is appealing to them.

He continued, “The collection from Bowden Old Hall mirrored and enhanced the new auction format with select items from each category, which sold very well. The second half of the sale comprised entries from select country properties which had the same enthusiastic following.”