Brightwells recent sale was an eclectic mix, including dolls, fashion, toys, and garden statuary. However, it was the Oriental items that supplied the leading prices on the day.

Featured on the front cover of sales catalogue, a beautifully modelled bronze elephant, from a Bristol vendor, rose above its pre-sale estimate of £800-£1200 with the hammer finally falling at £1700 to a local collector. 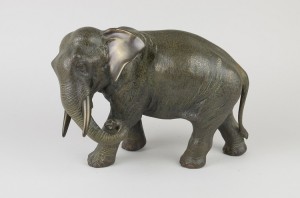 Continuing the demand for Oriental objects, three Chinese celadon jade carvings, which were modestly estimated at £300-500, were fiercely contested over and eventually sold at £3100 to a commission bidder.

Once again rings proved the most popular jewellery pieces, with a substantial diamond cluster ring by Van Cleef and Arpels selling to a commission bidder for £3000 and a diamond cocktail ring bought in the room for £1200.  Emeralds were in demand, as an emerald and diamond three stone ring made £2000 and a magnificent 7ct emerald and diamond cluster ring found a buyer at £5250. Possibly the most surprising piece, was an extremely unusual French opal, ruby and diamond ring which quadrupled its estimate selling to a buyer in the room for £1050.

A pleasing result amongst the metalware saw six 18th century brass cylindrical measures engraved “The Borough of Bewdley”, from quarter gill to imperial quart fetch £1750. Consigned by a Worcestershire vendor, there were several absentee bids up to about £500, but a battle on the telephone between two avid collectors, saw the price sail way above expectations.

Highlight amongst the textiles saw a long Kashmir Patka, once owned by Lucy Rabagliati, wife of Major D.S Rabagliati, an associate of Laurence of Arabia, realise £1000.