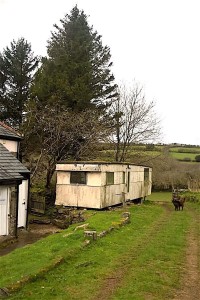 It’s a story of sparkling treasure buried in a most unlikely location, and only came to light when antique restorers and dealers, Gilboy’s was called on to restore two pieces of furniture on a remote farm near Newton Abbott in Devon. 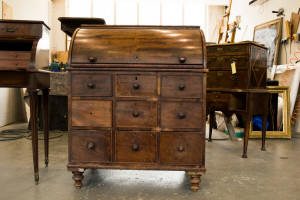 When the pieces were ready, the manager of the farm was so impressed with the results that he asked Simon Gilboy to look at some further pieces in a rather forlorn-looking caravan on the charitable farm’s land.

Despite being covered in cobwebs and mould, Simon spotted a cylinder bureau that was worth restoring. “There were many signs of a skilled hand having made the bureau. The quality of the mahogany used, the fine dovetailing to the front as well as the rear of the drawers and the original blue paper lining to the very unusual nine drawer layout. My thoughts were that it dated to the early 19th Century, very much French in style but the veneers and polished finish looked British.” 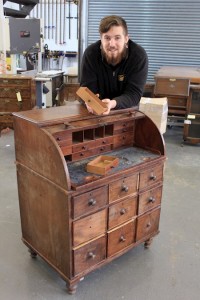 The bureau was brought to the Giloboy’s Staverton workshop for restoration where, during the work, restoration apprentice Archie Newnham-Dibley noticed that one of the removed drawers was shorter than all the others. When he looked into the drawer’s fitted section he could see a turned mahogany handle located deep within. 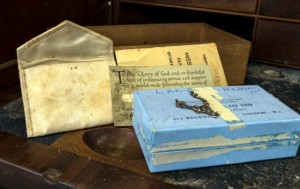 The box was inscribed in pen with the words ‘Lady Braund’ and inside was a brooch with no fewer than 75 diamonds and 34 emeralds. Simon said, “The very next day I visited Wellington’s Jewellers in Totnes and presented the brooch to the jeweller John Doble who confirmed they were genuine emeralds and diamonds which he thought to be set in silver with a later 9ct gold fastener.” 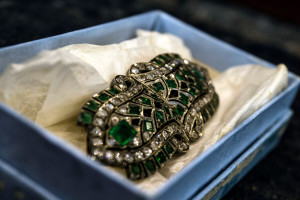 The piece appears to be an Art Deco double clip brooch from the 1920s. It’s likely that a genuine Garrard & Co brooch with such a provenance would command a price of thousands of pounds at auction.

Simon said, “It is not unusual for us as restorers to find personal effects that have been trapped in the body of a bureau or chest of drawers but this was clearly apparent to all of us that it was potentially a very valuable, special secret that may help to fund the charitable trust that Elizabeth Braund had dedicated so much of her life to.”