A pair of rare 19th century Chinese vases smashed the previous saleroom record at Halls fine art auction house in Shropshire when they recently sold for £85,000. 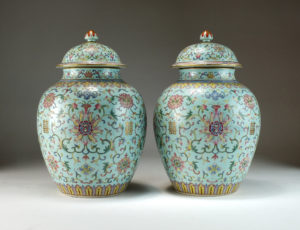 The famille rose porcelain vases and covers, consigned by a Bridgnorth vendor to Halls’ Asian Art auction in Shrewsbury, were originally part of a collection owned by Dr Wilfred Watkins-Pitchford (1868-1952), noted bacteriologist and pioneer of medical research in South Africa.

The turquoise coloured vases were beautifully painted with flowers, bats and Chinese symbols meaning double joy. Halls’ Asian Art specialist Alexander Clement believes they were probably made as a wedding gift in the Daoguang period (1821-1850).

Eclipsing their pre-sale estimate of £20,000 to £30,000, the vases attracted four telephone bids and eventually sold to a Chinese bidder. Mr Clement said the mark on the bottom of the vases adhered to the reign from which they came, making them rare in today’s market.

“It does seem to be the trend with Chinese porcelain that the mark and period is the thing that identifies pieces for special attention and the other key thing is provenance,” he explained. “If you combine the two, you have the magic formula and that’s what these superb vases had.

“The vendor is delighted with the price achieved and we hope it will open other people’s eyes to the potential of selling good pieces of Asian art with Halls.

“The vases had been owned by the vendor for around 50 years, his wife having bought them at the auction of the estate of Dr Wilfred Watkins-Pitchford, a prominent physician who spent a lot of time in South Africa.”

Due to ill health, Dr Watkins-Pitchford retired to Bridgnorth where he became active in local history. Born in Tattenhall, Cheshire, he died in September 1952 at the age of 84. 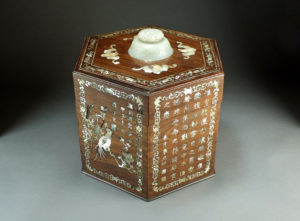 Also included in the auction was a collection of Chinese scholar’s objects belonging to a Ludlow man, who collected in Hong Kong and London between the 1970s and 1990s. The Robert Owen collection, which ran to 87 lots, sold for nearly £20,000. Top selling piece was a Chinese mother of pearl and jade inlaid rosewood hexagonal treasure box from the Qing Dynasty, which made £6,000 (left).

“Mr Owen, who held a senior position in the financial services sector in Hong Kong, assembled an eclectic mix of scholar’s objects over a period of 20 or so years, buying what caught his eye in Hong Kong, mainland China and London between the 1970s and early 1990s.

“The collection had been packed away in the basement at Mr Owen’s home and he decided the time was right to sell.” 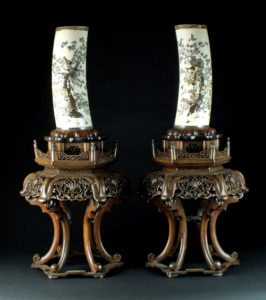 Other leading prices from the Qing Dynasty were £2,400 for a pair of rock crystal snuff bottles, £2,100 for a bronze figure of Laozi and £1,800 for a large carved bamboo model of a river boat.

Halls’ fine art director Jeremy Lamond was delighted with the “absolutely fantastic” auction result and the setting of a new record price in the Battlefield saleroom, beating the £60,000 achieved for an Old Master painting by Dutch artist Dirck van Delen in 2014.

However, Halls’ auction record, achieved at the former Welsh Bridge saleroom, still stands at £326,000 for a painting by 18th century English equestrian artist John Wootton in 2010.