A name synonymous with the history of cutlery is set to sell his remaining collection with Sworders of Stansted Mountfitchet in Essex.

Bill Brown began collecting cutley over 60 years ago after spending 10 shillings on his first purchase: a knife and fork from a Dutch travelling set, c.1720. In 2003, the Heritage Lottery Fund and the Art Fun jointly put up a grant of £485,000 to help Museums Sheffield acquire 1,000 pieces from the Bill Brown Collection. The unique collection spans the history of British cutlery and flatware, alongside foreign pieces that have influenced British design.

Individually, each lot will be offered in the low to middle hundreds of pounds, but their academic and historical value to serious collectors is difficult to overestimate.

They span a period from the late 17th to the early 20th century, from continental Europe to Georgian London and from makers Georg Jensen to Paul Storr. 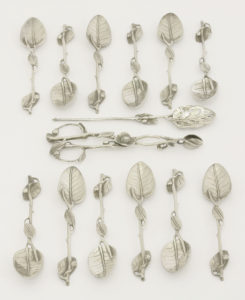 Pick of the lots must be a George III/George IV composite silver-gilt campaign set, comprising a mix of makers and dates, and featuring several pieces by Paul Storr. They include two fiddle thread and shell pattern dessert spoons (1816/21), and a knife with detachable blade.

Brown, who trawled the Victoria and Albert Museum as well as the continent in his quest for learning and rarities, eventually decided to rationalise his collection to help him focus on the history and development of British eating habits.

Having worked as a graphic designer, his chief interest was not dry, academic dating, but visual attributes – design, function and materials – and how these changed in tandem with habits and etiquette. One of his favourite pieces, now in a museum on the continent, was a child’s plastic spoon, designed with a train on the handle, to encourage an infant to open their mouth as the “choo choo” arrived. 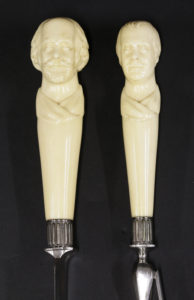 In his introduction to British Cutlery – An Illustrated History of Design, Evolution and Use, edited by Peter Brown, he writes: “I could see trends which were not apparent before, such as the way the shape of the blade evolved, and the changes in constructional technique.” All of which, of course, helped in the dating and attribution of pieces.

“We are delighted and honoured that Bill Brown has chosen Sworders to disperse this outstanding collection, and we will be highlighting all the important aspects of it over the series,” says Sworders managing director Guy Schooling.

The first of what will be a series of auctions at Sworders over an extended period will take place on July 5.