An extremely rare ‘Campaign’ mantel timepiece – one of only six recorded by the famous firm of Charles Frodsham & Co Ltd. – has found its way back home after more than eighty years after the hammer went down at £9,500. 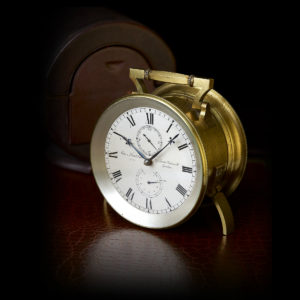 Numbered 2521, the clock was made at the firm’s 27 South Molton Street address in around 1930, according to Richard Stenning of Charles Frodsham & Co. Ltd. Its early history is at this stage unknown, but in 2007 it was bequeathed in a will to a Birmingham man by his aunt who is believed to have been a resident on the south coast during the 1930s.

After nine years in storage, images of the clock were emailed to Mark Huddleston, Clock Specialist in the Antiques Department at Fellows in London. Initial reaction was that the piece had been adapted from a marine chronometer,  ‘concocted’ into a mantel clock and refitted with lever platform escapement and chain fusee movement, and so worth perhaps a few hundred pounds as a novelty.

However, in glancing through Charles Allix’s 1977 reference work on the subject to find the dates at which Frodsham worked from South Molton Street, illustrations of a similar example with matching handle and folding feet could be seen. Through their existing links to Richard Stenning at Frodshams, Fellows were then able to undertake further research and establish that this was indeed ‘the genuine article’, only the sixth known example, and just the fourth to come to auction. An added bonus was the presence of the original branded travel box and numbered winder.

In re-evaluating the piece, Fellows made reference to two sold by Christies in 1998 and 2006 (examples numbered 2129 and 1652 respectively), both of which had sold in the £3,000 region, and took this as a worst case scenario given the much later numbering to the current example. As a more relevant comparison, Bonhams sold a much earlier example, number 1651 in December 2012 for £10,000 hammer. Hopes were for somewhere inbetween these two extremes, but strong competition from a determined bidder in the room against Frodsham & Co on the telephone saw the latter win out at £9,500 hammer.