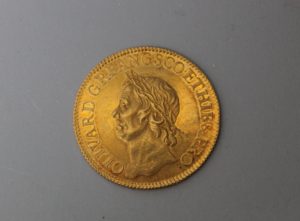 Civil war buffs and serious coin collectors are expected to be out in force for the sale of a 1656 gold broad of twenty shillings at Staffordshire auction house, Cuttlestones. Dating from the period Oliver Cromwell spent as Lord Protectorate, this coin is notable not only for its rarity but due to it being struck using what, at the time, was state of the art technology by Pierre Blondeau from a die engraved by Thomas Simon.

The coin was part of an experimental run of the Frenchman’s minting technique and, dated 1656, these first coins were minted in 1657 at Worcester House and then at Drury House before, the method proven, production moved to the Royal Mint.

The coin coming under the hammer is one such early example and, bearing the profile of Cromwell as Laureate on facing left to one side, the crowned shield of the Protectorate to the reverse and with grained edge, it is expected to achieve somewhere between £8,000 – £12,000.

In a twist of fate, Cromwell’s coin will be going head-to-head with one dating from the reign of his great adversary; a somewhat less rare – but nonetheless of interest to collectors – Charles II 1662 gold broad of twenty shillings. Featuring a bust of the recently restored Monarch to one side and the crowned Shield of Arms to the other, this was one of approximately 3,400 examples minted and carries an estimate of £3,000 – £5,000.