A signed harmonica played by Bob Dylan is to be auctioned by Hansons Auctioneers in their June Music Memorabilia Sale with an estimate of £4,000-£5,000. 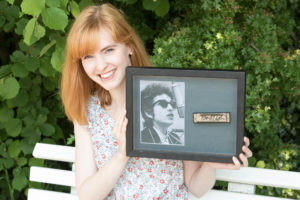 As a prized object that once belonged to the 75-year-old music legend, the Hohner ‘Pocket Pal’ is one of several items to be gifted to Cesar Diaz, Dylan’s guitar and equipment technician, during the ten years he worked for the singer. It is clearly signed ‘Bob Dylan’ in black ink.

The item has an impeccable provenance, a declaration of authenticity signed by Diaz being attached to the display case which confirms that it was used by Dylan on stage.

Hanson’s Music Memorabilia specialist Clair Howell commented, “It is very exciting to have an instrument known to have been played by one of the greatest musicians of our time. It would be difficult to overstate Dylan’s impact on popular culture, so we are expecting worldwide interest.”

The harmonica, will be auctioned, along with many other music related items on June 23rd.