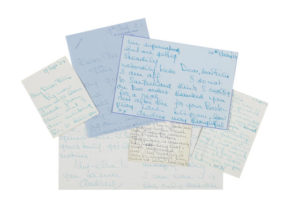 A collection of letters written by Audrey Hepburn during the most dramatic decade of her life has surfaced for the first time. It will go under the hammer at the Bonhams Entertainment Memorabilia sale in London on 29 June.

Written between 1951 and 1960, the letters reveal a tumultuous time in the actress’s private affairs as she dealt with her stratospheric rise from an unknown, struggling ballerina to one of the most famous faces in the world. Hepburn’s broken off engagement, marriage, and birth of her first child are all recorded in her characteristic loopy script. 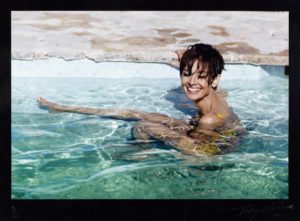 ‘Would you believe it,’ she wrote in 1951, as a girl of 22, ‘I’m in Monte Carlo working on a French picture. The place is heavenly and this is the best thing that’s ever happened to me.’ She was filming for Monte Carlo Baby, one of her very first movies, just two years before she was picked up to star in her breakout film, Roman Holiday.

A year later, Audrey discusses ‘with a heavy heart’ her broken off engagement with James Hanson, which occurred after Hanson continued to push his fiancée to get married amid her hectic schedule. Hepburn had been in Rome wrapping up filming for Roman Holiday, while Hanson was regularly photographed leaving London nightclubs with other actresses and socialites on his arm. ‘It is all very unhappy-making,’ Audrey wrote from Chicago a few months later. ‘I fear I thought it possible to make our combined lives and careers work out.’ 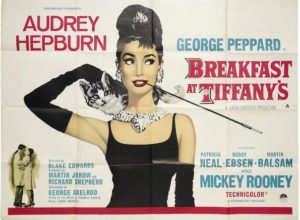 But by 1954, Audrey had found true love. She met accomplished actor Mel Ferrer, 12 years her senior, at a party in London. Ferrer fell instantly for the young actress. He promptly divorced his wife and married Hepburn in private in 1954. ‘We want to keep it a dark secret in order to have it without the ‘press’,’ Audrey confided a few weeks before the ceremony, which was to be held ‘in a tiny chapel with a wedding breakfast after.’ Hepburn and Ferrer went on to become co-stars in films such as Sabrina (1954) and War and Peace (1956).

The following years were laced with tragedy for the young star, as she suffered two miscarriages. The final letter in the collection is a joyous note to her mentor and lifelong friend, Felix Aylmer, following the birth of her first child, Sean Ferrer. ‘Sean is truly a dream’, she exclaimed, ‘I find it hard to believe he is really ours to keep. I long to show him to you. We all three send our love and kisses, Audrey.’