An impressive collection of autographs and memorabilia will be offered at Dreweatts & Bloomsbury Auctions in August, with estimates ranging from £100 to £7000 with a total sale value of £117,980. 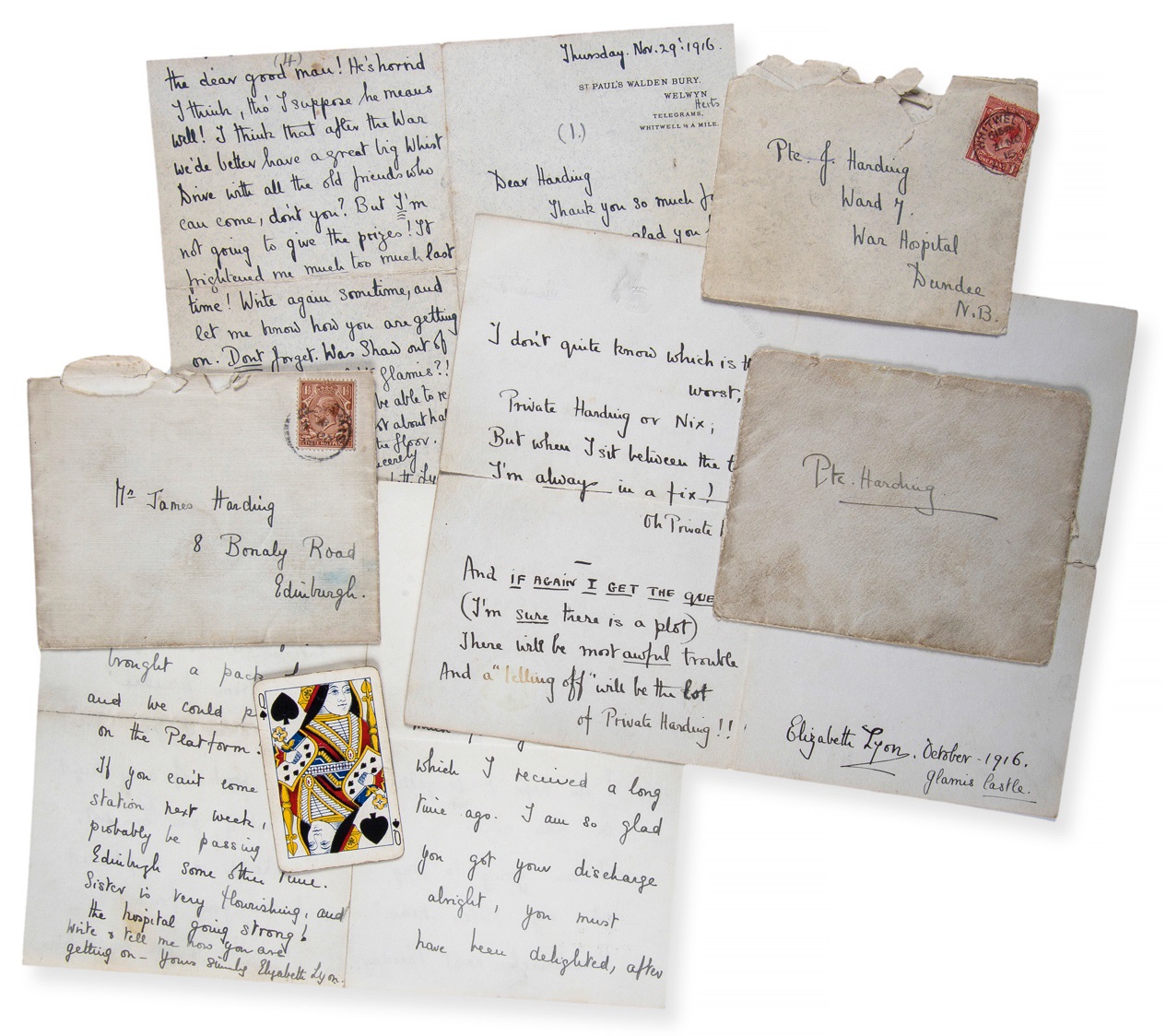 Of particular note is a collection of six autograph letters signed by Elizabeth the Queen Mother, penned in her late teens (‘Elizabeth Lyon’) and addressed to Private James Harding during the First World War. These letters give a beautiful insight into the warm and generous character of the teenage Queen Mother and her involvement in the war effort. Elizabeth met and nursed the wounded Private Harding at Glamis Castle, her family’s Scottish home, that had been turned into a hospital at the outbreak of the war in 1914 and continued a warm correspondence with him for many years. These personal letters are touching, recalling games they used to play together and references to the war. The letters include charming poems she had written (extract below), playing cards and photographs (“I’m so glad you liked the photo, personally I think it’s dreadful!…”) Harding and his companions played tricks on Lady Elizabeth: “There was ‘wild laughter’ when she got the Queen of Spades time after time – and she discovered that they had been passing it under the table to give to her”.

A rare letter from Charles Dickens to fellow novelist Wilkie Collins, dated 1857, is another auction highlight, estimated at £1,000-£1,200. Dickens wrote “Russell is just going to India, and Delane and he are coming to dine with me…Will you come? Very quiet and no party”. Charles Dickens and Wilkie Collins met for the first time in March 1851, when the former was already an acclaimed novelist. They were introduced by mutual friend Augustus Egg, who recruited Collins to Dickens’s amateur theatrical company. Collins and Dickens established a friendship that lasted until Dickens’s death in 1879.

The guests mentioned by Dickens have been identified as William Howard Russell and John Thadeus Delane. The former was a journalist and war correspondent for The Times. He achieved notoriety for reporting the Crimean War. He left for India in 1857 in order to cover the Indian Mutinity, which had begun in May with the rising at Meerut and the seizure of Delhi. John Thadeus Delane was editor of The Times from 1841 to 1877 and a close friend to Dickens.

Other highlights include a cheque signed ‘Marilyn Monroe’ (estimated at £1,200-1,500), and a unique album page signed by all the members of The Hectics, Freddie Mercury’s first music band during his years at school near Bombay. Signatures comprise: Fred Bulsara (Freddie Mercury) Dereck Branche, Bruce Murray, Farang Irani, Victory Rana and Haroon Ansari. (Dated c. 1961, estimated, £1,500-£2,000). Also, two rare carte de visite taken by Alexander Gardner from the original photographic negative by Matthew Brady, showing Abraham Lincoln seated in a chair by a table with a ink well on top, the larger photograph featuring ‘Lincoln’ annotated on rear of mount. (Estimated at £800-£1,200)