With Wimbledon just over , you could get a taste of how it must feel to be Serena Williams or Andy Murray and hold your own tennis championship trophy aloft.

Surrey auction house, Ewbank’s, is staging a special sale for a fascinating collection of tennis medals and memorabilia, on 6th September. 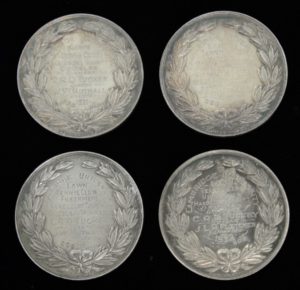 The collection has been consigned for sale by the Tuckey family from Godalming in Surrey, who have had a long association with tennis; Agnes Tuckey and her doubles partner Hope Crisp were the winners of the first Wimbledon mixed doubles in 1913.

Agnes and her husband, Charles Orpen Tuckey, had three children, Richard, Raymond and Kay. Their son Raymond Tuckey won the men’s doubles at Wimbledon in 1936 and was part of the winning British Davis Cup Team in 1935 and 1936.

Agnes, when in her fifties, partnered Raymond in the mixed doubles in 1931 and 1932, the only instance of a parent and child teaming up at the championships.

Daughter Kay played at Wimbledon in 1951, reaching the quarter finals before being beaten by Louise Brough, she also featured on the cover of the Wimbledon programme in this year. Kay was part of the Wightman Cup Team from 1949 to 1951 and won several other tournaments.

Following Kay’s death in March 2016, her family have consigned this historic collection for sale, including medals, trophies, and signed memorabilia.

A cased collection of four silver winner’s medals for the doubles competition at Cambridge University Lawn Tennis Club, Queens, two won in 1930, others in 1931and 1932 by Raymond Tuckey, has been given an estimate of between £80 and £120.

Two gold medals won by Raymond Tuckey at The Lawn Tennis Hard Court Championships of Great Britain are for sale. A 9ct gold winner’s medal won in 1935 for mixed doubles with M.C. Scriven, which is cased, weighs c25g has been valued at between £150 and £250. Another gold winner’s medal, this time for the men’s doubles with Pat Hughes in 1936 is cased and weighs c25g also carries an estimate of £150 to £250. 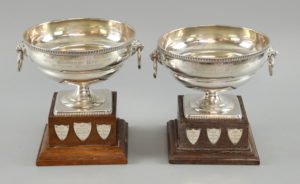 A cased bronze competitor’s medal from the Jubilee Lawn Tennis Championships at Wimbledon in 1926, has been valued at between £50 and £80. One side shows the gentlemen’s singles trophy and is inscribed, the reverse saying ‘Wimbledon, 1877-1926’.

The experts at Ewbank’s have given trophies the highest estimates within the collection. Two silver twin-handled trophies for the first Wimbledon mixed doubles in 1913 for Mrs C.O. Tuckey and H. Crisp have been valued conservatively at between £300 and £500. They are marked Birmingham, Elkington & Co., 1911, and weigh 28oz and stand five inches high.

Carrying the same estimate, is a collection of 11 silver army tennis trophies from the 1930s, all won by C.R.D Tuckey, 48oz total silver weight.

Two silver twin-handled trophies on wooden stands from the Ladies’ and Gentlemen’s Doubles Challenge Cup Hampshire Championship, are valued at between £250 and £350. They are marked Atkin Brothers, Sheffield, 1911, and weigh in total 37oz.

Alongside the cups and trophies consigned for sale, are a silver tray, a silver inkwell and an alabaster and agate desk stand, all won in championships by the talented Tuckey family.

The silver tray (20oz) won at the Devonshire Park Eastbourne, Veterans Singles All England Championship is marked Walker & Hall, Sheffield, 1932, and carries an estimate of between £120 and £180. A silver inkwell by Hawksworth, Eyre & Co. Ltd, was presented to C.O.Tuckey as first prize in the gentleman’s doubles at the 1900 Greystone’s Lawn Tennis Tournament, has an estimate of between £60 and £90.

The alabaster and agate desk stand (12inches high) was presented to C.R.D Tuckey in 1935 by the Lawn Tennis Association for being part of the team that successfully defended the Davis Cup at Wimbledon. Great Britain defeated the team from the USA by five matches to nil. It has been valued at between £80 and £120.

Among a lot of books and memorabilia is an autograph book signed by tennis players and others associated with the sport, including Queen Elizabeth II (dated July 29th), plus Raymond Tuckey, C.O. Tuckey, Agnes Tuckey, Bunny Austin, G.P. Hughes and many others. The lot has been valued at between £100 and £150, and also includes a copy of ‘Ladies of the Court’ signed by Virginia Wade, two signed Ted Tinling books, and a ‘Daily Order of Play’ signed by Louise Brough, Virginia Wade, Pauline Betz, Kitty Godfree, Alice Marble, Shirley Fry Irvin, and others.