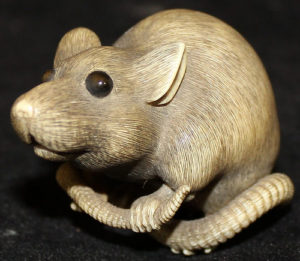 When the hammer finally fell, the successful bidder for the Meiji Period ivory carving paid £8,000 per centimetre.

Netsuke are miniature sculptures affixed to the end of a cord on a kimono. Because kimonos had no pockets, objects like pipes, money or medicine were kept in small pouches or baskets attached to the cord – much like a utility belt today. Netsuke were made in a range of materials, including amber, ivory, coral, nut, bone, and wood.

Auctioneer Philip Allwood said, “The competition was between two UK-based Oriental buyers on the phone lines. We were very surprised by the hammer price, which is one of the highest paid for a netsuke in recent years.”

Taking place earlier this month, the selected antiques sale was dominated by Oriental antiques. A pair of 19th Century Chinese cloisonné bowls decorated with script medallions and bats amongst clouds, standing at 17cm tall and measuring 33cm in diameter, achieved the second highest lot price of the day, selling for £13,400. Auctioneers had given bidders a cautious guide price of £300 to £500, due to signs of repair, and general wear and tear.

And the subsequent Lot – a matching bowl in slightly different form with the same bats amongst clouds decoration, standing at 13.5cm tall and measuring 58cm across – achieved £12,500 against an estimate of £200 to £300.

From the old to the modern, a large collection of contemporary gentlemen’s’ jewellery collectively achieved £45,000.

Elsewhere in the auction, an early Victorian mahogany rectangular extending dining table on three quadruped pedestals and paw feet achieved £6,000 against an estimate of £1,000 to £1,500.

And a mid 18th Century needlework sampler by Elizabeth Young, dated August 22nd 1768, aged 10 years, featuring upper case and lower case alphabet, numerals, two figures named “Thomas and Mary Young”, flowers, butterflies, and birds achieved £4,800 against the expected £200 to £300, while 19th Century lacework study of a gentleman, probably depicting The Duke of Wellington, achieved £4,800 against a modest estimate of £50 to £80.

The sale total of £303,000 was the highest since the auction house sold an undiscovered Rembrandt for £2.2 million back in 2007.