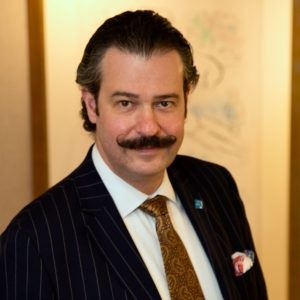 Nicholas D. Lowry is President & Principal Auctioneer and Director, Poster Department of Swann Auction Galleries in New York. Founded in 1941, the auction house specialises in Rare and Antiquarian Books and is now the largest specialist auctioneer of Works on Paper in the world.

What are the current hot sellers?
At the moment there is no one ‘hot’ area in poster collecting. In general, the entire field is on the rise, which is in fact much healthier than there being some particular craze for certain images, as that kind of bubble always ends up bursting.

What antiques do you have at home?
I collect Czech posters and graphic design from between the wars.

What piece would you love to sell in the auction room? 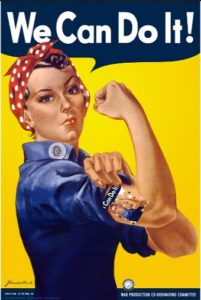 My dream item for years has been an original Rosie the Riveter poster. It is an image that everyone knows, but I have never seen one in real life, only illustrated in books. Unlike the majority of war posters, which were printed in large numbers by the government, Rosie the Riveter was privately printed by Westinghouse Electric as part of the war effort so far fewer were printed.

Will people go to auction houses in 20 years or will sales all be online?
If the human condition develops into further lack of need to congregate with similarly-minded people, then attendance at auctions and exhibitions will entirely disappear. But I find that hard to imagine. There is too much psychology involved in auctions. If it were simply a matter of buying something (like a pair of jeans) then no one would ever show up. Or as technology develops further maybe there will be a third option . . . ?

Tell us some trade secrets – what are you top tips for being at an auction?
Know what you want to buy and how much you are willing to spend. I have often heard people say never go above the limit you have set for yourself. However, as a collector, if I don’t get something that I want because of an additional $100 or so, I tend to get very angry at myself the following day. Spend some time at an auction before the item(s) you want comes up.
Learn to follow the auctioneer and how the bidding works. That way you won’t be surprised or overwhelmed when it comes time to bid on the piece(s) you came for.
If you are meeting a friend at an auction do not wave at them when they come in. The auctioneer will always know what you are doing, so don’t worry about it being considered an erroneous bid, but you are likely to be the butt of a joke from the podium. Also, all you have heard about scratching your head or picking your ear is silly. A good auctioneer knows the difference.

Where are you favourite antique hunting destinations?
My favorite is Brimfield, Massachusetts, and I make a yearly pilgrimage in September.

What’s the future for the trade?
I have spent a lot of time thinking about the future of the auction world, so much so that I have even begun researching (with an eye towards a book) the history of auctions. I can’t predict the future but I am confident that collecting is such a primal instinct or trait that there will always be auction houses around to cater to that large segment of society.