Shropshire’s Trevanion and Dean saw a new house record when an oil painting in their recent monthly antiques and collectables auction sold for £11,000. 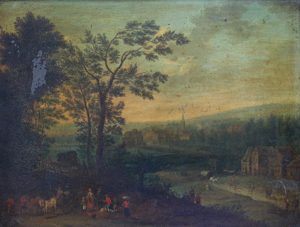 The small painting, measuring only 32cm x 42cm, is an oil on copper Flemish School painting depicting a landscape with figures on a track and a town beyond and dated to the 18th century.

Consigned by a local vendor to the auctioneer’s monthly auction of antiques and collectables, Aaron Dean, said, “We had an inkling that it would do quite well bearing in mind the amount of pre-sale interest we had in the piece, but we were quite surprised by the end result!”

In original, untouched and unrestored condition, the piece attracted international interest, not least because it was painted on copper. Paintings on copper may seem unusual, but in the 18th century was quite a usual process, especially for smaller paintings in which there was a lot of minute detail such as this one. 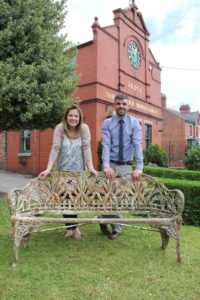 The next selling top lot of the day was a mid 19th century Coalbrookdale Lily of the Valley pattern bench which sold for £3,500 to a UK buyer.  In worn and rusted condition and lacking its slats, it had not travelled far in its life having being made in Coalbrookdale, Ironbridge, in the mid 19th century. 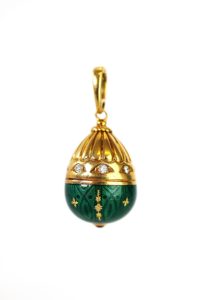 Christina Trevanion, auctioneer on the day said, “It just goes to show that the market at the moment wants pieces which have not been restored or amended in anyway way, shape or form.”

The jewellery and silver sections of the sale also performed strongly, such as a collection of Faberge by Victor Mayer selling for in excess of £3,000.  Present in the auction were a selection of egg pendants, a ring and a pair of earrings, which all sold well to private buyers all seeking a little slice of the quality expected from a Faberge work master.  Gold pieces were also very buoyant as the sellers capitalised on high gold prices since Brexit with both private and trade buyers competing for investment pieces.