Adrian Rathbone, Head of Paintings at Hansons, said, “In beginning the task of sourcing material for this auction, I looked to fresh fields, sourcing privately from our extensive valuation days from as far south as Stratford to Wilmslow, Cheshire in the north.” 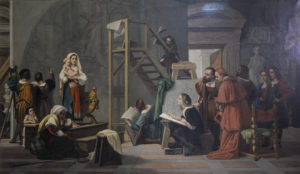 He continued, “The criteria for selection were simple.  The works must be new to the market, with a traceable auction record and, finally, realistically estimated.  Condition was also a factor, but the very poor condition of an early portrait did not deter would be buyers.  This tactic paid off and resulted in a 94% sale rate with most lots achieving more than the top estimates.  Bidding on the day was brisk in the room, online and on the phones.” 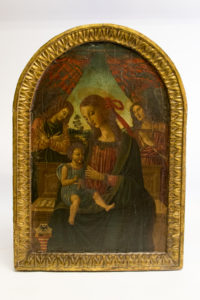 A fine 19th Century copy of a work after Charles Francis Jalabert titled The Young Raphael at Work in Perugino’s Studio which was unsigned sold for £1,550.  Elsewhere, a panel depicting Madonna flanked by winged saints with a Tuscan landscape beyond, discovered in a Leicestershire property, held particular appeal to an Italian online bidder. “Catalogued as in the ‘Manner of Perugino’, it appeared to be painted on parchment laid down onto a rustic arched wooden panel and had evidence of worm holes.  In the run-up to the auction there were differing opinions from a number of experts as to the date.  However, there was no putting off an Italian online bidder to secure it at £5,000.” 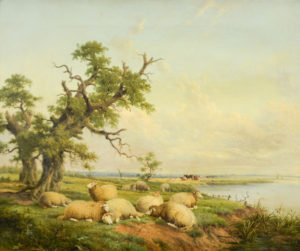 While Victorian art may be currently less in demand, Hansons say big names are still in demand, such as a Thomas Sidney Cooper oil of sheep grazing in a river landscape. It was discovered in a Lichfield farmhouse where the recently deceased owner had purchased it locally in the 1970s.  It sold to a private buyer for £4,800.

Another highlight from the sale, was a full length portrait of a young girl wearing a blue dress, circa 1690.  Discovered in poor condition languishing in the damp cellar of a South Staffordshire stately home, it did retain its original frame. It was purchased by a London based buyer for £4000 who intends to restore it to its former glory. 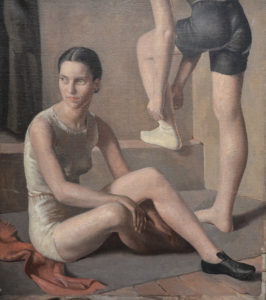 Highest single price was for a 20th Century an Art Deco period figural study in oils titled The Runners by British artist Lancelot Myles Glasson (1894-?).  The subdued colours and Art Deco appeal resulted in numerous phone and internet bidders vying for it, with the gavel eventually falling to a phone bidder for £7,800.