A poignant and compelling archive telling the story of one woman’s courage, compassion and dedication to duty during World War 1 is expected to create interest at Hansons Auctioneers in Derbyshire later this month. 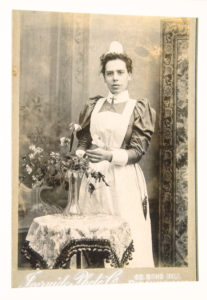 Commenting on the find, Charles Hanson Manager of Hansons Auctioneers remarked, “The archive is so important for what it tells us about the life of a WWI matron and nurse Miss Katy Beaufoy, whose bravery and final demise is captured in the collection.”

Miss Katy Beaufoy was one of only 300 nurses to lose their lives during WWI and this has to be one of the most comprehensive collections relating to such a woman. Her fascinating story is told from 10 May 1915 to 9 Sept 1917 and is her account of service as sister and matron in the Great War.

The vendor of the archive, Mrs Sue Wood, is a great niece of Katy Beaufoy, comments, “It’s time to let another collector or museum enjoy the archive which my family has kept save for many years.”

Born in Aston Birmingham in 1868, Katy trained as a nurse in Devon. After being rapidly elevated to the role of Sister in charge of operating theatres, she took the courageous decision to volunteer for service in the Boer War on the late 1890s.

Nursing was still in its infancy at this time and the value of nurses’ contribution had yet to be realised. The rather formidable daughter of Queen Victoria, having been impressed by the endeavours of Florence Nightingale, introduced Princess Christian’s Army Nursing Service Reserves which gave some status to the nurses as it operated under the direction of the War Office. It was this organisation Katy joined and her badge, numbered 689 is to be included in the sale 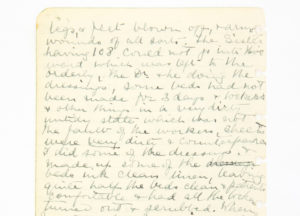 Following the war, after some time working in private practice in Italy and being decorated by the Queen of that country for her services, Katy was accepted in to Queen Alexandria’s Imperial Military Nursing Service and bravely volunteered once again to face further perils at the outbreak of the Great War in 1914. Katy was posted to serve on board the ‘Ionian’ during the infamous Gallipoli Campaign.

Katy witnessed horrific injuries during this time, In her diary she notes from 24 May 1915;

‘I had a ward of about 50 beds, such bad, bad wounds, frightful head ones, legs and feet blown off and arms wounded of all sorts ……Have some very bad cases, two shot through the lungs, pouring out pus. One amputee had his foot blown off and part of his leg.’

On 18 December, Katy relates that she ‘felt almost demented with tiredness, so much to do.’ 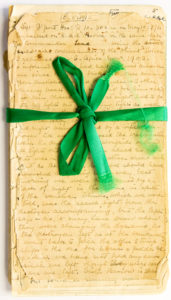 Katy’s hand-written diary  shows she did have some opportunities to escape the brutality of war, visiting the Pyramids and the Sphinx at Giza. She writes, ‘we went to the pyramids …had our photos taken on the camels as we sat in front if the sphinx. It was a wonderful antiquity, it used to be buried in sand up to the neck, but it is now cleared and so the rock bust stands forth.’ The original photograph of this excursion is included in the collection.

Hansons Militaria expert, Adrian Stevenson, said, “It is fascinating to read how Katy was able to maintain her interest in the beauty of her surroundings despite her exposure to the shocking condition of the casualties she was obliged to tend. She regularly comments on the architecture, the attire of the various people she encounters and her love of plants and flowers are very apparent. This makes for an unusual and telling juxtaposition with her description of the suffering of the soldiers and so gives an insight in to the thoughts of this remarkable woman.”

Katy narrowly escaped death when the hospital ship to which she had been assigned, ‘Dover Castle’ in June 1916 was torpedoed and sunk on May 26 1917. Katy had been forced to leave the vessel and return home for a while due to ill-health and so escaped with her life, unlike many of her colleagues.

Her fate however was merely postponed as, on returning to work as Matron on HMHS ‘Glenart Castle ‘ in September 1917, she was lost, presumed drowned, in February 1918, when the vessel  was torpedoed  by German Submarine U56. It sank within a matter of a few minutes with only 32 survivors of the 182 on board.

The sinking of the ship was considered a war crime as the vessel was clearly marked as a hospital ship though the Captain of the U56, Kapitanleutenant Wilhelm Kiesewetter escaped justice and returned to Germany

Charles Hanson added, “This outstanding group has been really moving to handle. As well as the hand written diary, personal photographs and all her medals, including South Africa medal, British War and Victory medal and 1914-15 Star, her Death Plaque and Dedication Scroll have also been preserved.”

In Feb 2002 a memorial was erected at Harland Point, close to the sinking of the ‘Glenart Castle ‘ to commemorate those who died. Miss Beaufoy’s family were a major driving force behind the fundraising efforts.

Hansons specialist Militaria auction is to be held on Monday 23rd August.