An ancient wooden maul used by craftsmen to carve Egyptian temples over 4000 years ago has turned up in a Derbyshire wardrobe. 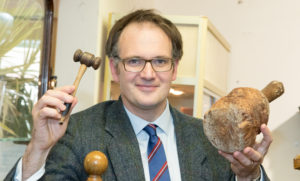 The wooden maul, which has been verified by the Natural History Museum in London, is expected to realise up to £4,000 when it is entered into Hansons Autumn Fine Arts Auction on Friday 7th October.

Charles Hanson said, “The wooden maul has a beautiful patina and although clearly used, it’s in remarkable condition, bearing in mind it is close to 4,500 years old.  It is astonishing to find something like this in Derbyshire.”

The anonymous owner of the ancient tool inherited the maul from a relative who served in WWII. Stationed in Cairo at the time, the relative had been camped in a cave in the Mokattam Hills, and whilst digging discovered the early artefact.  Since inheriting the tool, the Derbyshire vendor stored the item in a wardrobe to keep it out of sunlight. 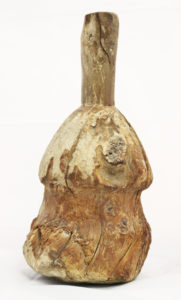 Charles said, “To hold something which is twice as old as Christianity and to close your eyes and think back to the ancient Egyptian civilization, and the time of the Pharaohs, is quite remarkable. The tool would almost certainly have helped with the building of important ancient temples of the day and would perhaps have witnessed the pyramids being built.”

He continued, “The wooden carver’s Mallet is also virtually the same today as it was four thousand years ago.  The tool has a rounded head at the end of a handle.  The curved head allows the carver to strike the head of the chisel without having to keep the Mallet in any kind of orientation in the hand. The tool will eventually wear out as each blow of the chisel also takes its toll on the striking tool.”