A collection of ‘Chelsea Toys’ has been consigned to Sworders‘ autumn Country House Sale by a descendant of renowned collector, Hugh Marsham Townshend.

When in the middle of the century collector Hugh Marsham Townshend (1878-1967) was amassing a collection of gold-mounted porcelain scent bottles and other trinkets, most were thought to be the products of the Chelsea porcelain works or a shadowy enterprise known as the ‘Girl in a Swing’ factory.

The name (a reference to an enigmatic white-glazed figure in the Victoria and Albert Museum) was used for decades to describe the products of an unknown factory until evidence emerged of a hitherto unknown porcelain works that operated in the St James’s area of London. It was run between 1748-59 by one Charles Gouyn (d.1785), a jeweller and his stock in trade was a range of small luxury wares including many of the novelty trinkets previously known simply as  ‘Chelsea Toys’. The precise location of his factory, and the identity of the modeller of these distinctive wares, remain unknown.

Some of Townsend’s remarkable group of ‘toys’ have been consigned to Sworders in Stansted Mountfitchet by a descendant. The collection comes with a list, compiled in 1961, documenting purchases from two of the major English porcelain dealers of the 1940s and ’50s – DM & P Manheim and I Staal of London – and referencing other examples pictured in the literature of the time including those in GE Bryant’s influential tome, The Chelsea Porcelain Toys published in 1925 and the catalogue of the Irwin Untermyer collection, now in the Metropolitan Museum of Art in New York. 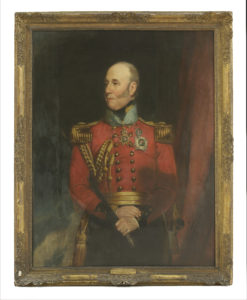 A total of 12 pieces – some by Chelsea, others from the St James’s factory, will be offered as part of Sworders’ Country House sale on September 13th. They carry estimates ranging from £800 – £1,500.

The sale will also feature a portrait of the Honorable Sir Horatio Townshend by Henry William Pickersgill RA (1782-1875).

The oil on canvas shows the subject standing and wearing a uniform complete with Waterloo medal. Townshend was a Grenadier Guard, one of Wellington’s men; he was badly injured in the Waterloo campaign. He became MP for Whitchurch, Hampshire and was appointed Governor of Windsor Castle. He was awarded the status of Knight Commander of Hanover and wears the two orders denoting this, beside his Waterloo medal. He died, aged 63, in 1843 and his coffin was carried to the family vault by regimental survivors of Waterloo. The painting has an estimate of between £2,000 – £3,000.