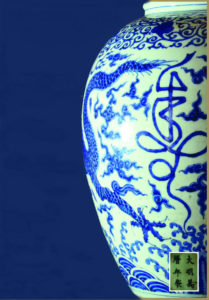 Dating from the reign of Wanli, 1573-1620, and bearing his six character mark to the base, the large vase is of Imperial proportions measuring 52cm high and 50 cm in diameter.

It is decorated with two dragons swirling amongst clouds either side of a mystical character, making it more unusual than most vases which tend to have more geometric decoration and adds weight to the Imperial connection.

One thought on “Rare Chinese vase at Lawrences”