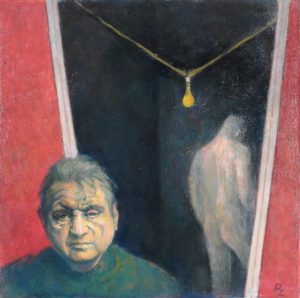 Works from the studio collection of painter Zsuzi Roboz (1929-2012) go under the hammer at Dreweatts & Bloomsbury in November.

Born in Budapest in 1929, Roboz counted portrait painting among her many talents, but saw herself as a painter who sometimes painted portraits, when she was inspired to do so, primarily of friends and artists whose work she revered, mostly leading personalities from the world of art, theatre, dance, literature and music, rather than as a professional portraitist. This gives her portraits a distinctive personal, revealing quality. A highlight from the collection is the portrait of Francis Bacon which demonstrates Roboz’s unique ability to capture her subjects in a relaxed, almost off-guard moment, as well as presenting their creative aura to the viewer (Est £1,500-2,000). The auction also features portraits of Lucian Freud (Est £1,000-1,500) and Eduardo Paolozzi (Est £1,500-2,000) both of which serve as choice examples of the intimacy and calm she manages to achieve with her subjects.

This interest in depicting the psychological nuance, particularly of creative individuals, can trace its inception to early on in her career when she was commissioned to create ‘behind the scenes’ drawings at The Windmill Theatre in Great Windmill Street (London). The nude revues, famed for their “We never closed” attitude during the war, were finally about to close in 1964, when Roboz set about capturing intimate moments in her performer subjects’ theatrical lives, facilitated by the fact that her genius for friendship embraced them all. 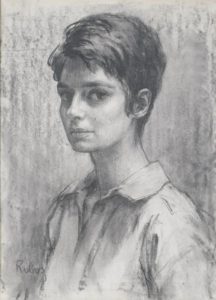 Fundamentally Roboz, tutored by famous royal portraitist Pietro Annigoni, was a superb draughtsperson, as is witnessed by her series of brilliant, sensuous nudes. She herself regarded her thrillingly imaginative symbolic compositions as her central works. They speak a universal language, and include a series of experimental collages as well as many ambitious oil paintings and pastels. Her special skills are evident from both her striking Self-Portrait (pictured, Est £700-900) and from nudes like Eva (Est £400-600). Both her own and Eva’s fine bone structure is particularly well depicted in these arresting charcoal drawings. 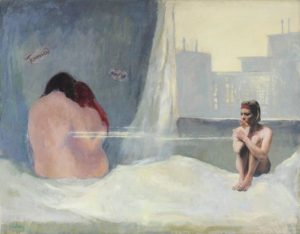 Roboz was married to property developer Teddy Smith, one of the originators of the Chichester Festival Theatre. This association provided her with access to some of the highest-profile stars of the British stage. In 1972 she was commissioned to make a series of portraits celebrating 10 years of the Chichester Theatre, including her portrait of Leslie Evershed-Martin (the founder). This painting is now in the collection at the National Portrait Gallery.