A collection of Russian Royal glassware spanning the reigns of Catherine I (1725-1727), through to the last Emperor of Russia, Nicholas II (1894-1917), will be the highlight of Chiswick Auctions‘ Ceramics and Glass sale next month. 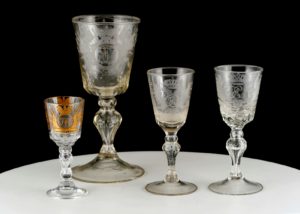 Amongst the collection is a Russian Royal wine glass from an extraordinary service of 1,500 pieces commissioned for the celebrations of the Tercentenary of the Romanov dynasty in 1913. The commission by Nicholas II (1868-1918), the Emperor of Russia, was undertaken by the Imperial Glassworks in St. Petersburg and bears the crowned cypher monograms HA II for The Emperor and his consort Empress Alexandra Feodorovna (1872-1918).

James Peake, Chiswick Auctions Ceramics and Glass specialist, said: “Items with Royal provenance are always exceptionally popular amongst collectors. This selection from a private collection, is particularly exciting as it has its roots in Imperial Russia. Each piece would have been specially-commissioned for each monarch during their reign and offers an insight into the craftsmanship and quality of pieces being created during these periods.”

Also amongst the selection is a glass goblet produced for Catherine I of Russia (1684-1727), second wife of Peter the Great. It is decorated with her crowned cypher monogram EA Yekaterina Alekseyevna and due to her short reign, only a few pieces were commissioned, making this goblet exceptionally rare. The goblet holds a conservative estimate of £600-£800.

An impressive engraved goblet in the sale, dates from circa 1750 and is believed to have been created at the Imperial glassworks in St. Petersburg for Empress Elizabeth Petrovna I of Russia (1709-1762). Elizabeth Petrovna was the daughter of Peter the Great and the Empress of Russia. Her reign was known as ‘Russia’s Age of Enlightenment’ and during her reign she not only founded Russia’s first university, but led a successful campaign against Frederick II of Prussia during the seven year war. The goblet is estimated to fetch £800-£1,200.

Another engraved Royal goblet from circa 1770-1790, is decorated with a double-headed Imperial eagle surmounted by a coronet, with the monogram of Empress Catherine II of Russia. Also known as Catherine the Great (1729-1796), she was the longest ruling and most influential female leaders of Russia, with her reign becoming known as ‘The Golden Age’.  The goblet is estimated at £500-£700.