Roses, a charming still life painted by Henri Fantin-Latour (1936-1904), and once owned by Sir Harry Veitch, a founding member of the Chelsea Flower Show, is one of the leading works in Bonhams next 19th Century, Victorian and British Impressionist Art sale in London on 28th September. Executed in 1889, it is estimated at £200,000-300,000. 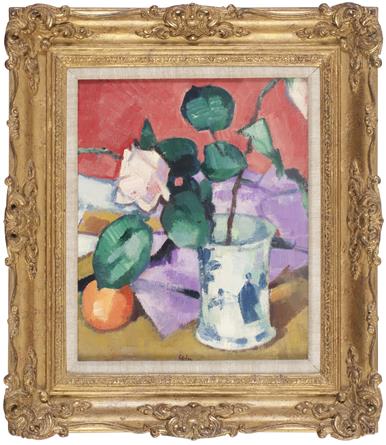 Born in Exeter, Sir Harry Veitch was one of the leading horticulturalists of the 19th Century. He played a major role in the formation of the Royal Horticultural Society and was responsible for securing a permanent home for the annual Chelsea Flower Show in the grounds of the Royal Hospital. He was the first horticulturist to be knighted.

Fantin-Latour’s reputation in his native France is largely based on his portraits and symbolist works, but in Britain he is principally known for his flower paintings. The artist made his first visit to England in 1859 and exhibited prolifically at the Royal Academy Summer exhibitions, where he showed 81 works between 1862 and 1900 – most of them flower studies.

His fellow painter, the American James McNeill Whistler (1834-1903), became a long-standing friend and patron – they met in 1858 – and he introduced Fantin-Latour to British collectors such as Constantine Ionides, who bought several works from the artist. These are now in the collection of the Victoria and Albert Museum.

Bonhams Director of 19th century paintings, Charles O’Brien said, “Fantin-Latour was once described – with justice – as ‘the 19th century French flower painter par excellence’. His paintings were enormously popular in Britain during his lifetime and they continue to enchant collectors in this country and throughout the world.”