An unusual collection of Russian medals and other militaria from a Kent collector are going under the hammer later this month at Charterhouse Auctioneers in Sherborne, Dorset.

Highlight of the collection is a group of medals awarded to Platoon Commander Vladimir Venidiktovich Shkil who was awarded the Order of Alexander Nevsky, a silver Order of the Patriotic War and an order of the Red Star. There is also his original award books and copy of research relating to Vladimir which was carried out by specialists in Russia. The group has an estimate of £1,400-1,800. 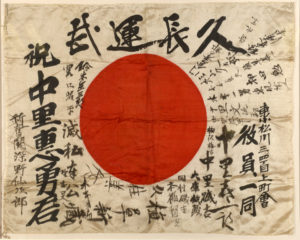 “We have long had an interest in coins, stamps, medal and militaria at Charterhouse having achieved world record prices such as the Dambusters medals we sold for £148,000 last year.” Commented Richard Bromell. “Which is why a militaria collector in Rochester, Kent, contacted us to auction his collection including a rare selection of Russian awards estimated to sell for thousands of pounds or maybe that should be rubles!”

Alongside Russian items, there is also a Second World War Japanese Hinomaru good luck silk flag. These were a traditional gift for Japanese servicemen deployed during the military campaigns of The Empire of Japan. Framed and glazed it is estimated at £300-400.

The collection also features items from more recent times, including an Order of the Armed Forces of the Motherland of the USSR from the Soviet-Afghan War in the 1980s. Awarded to Major Alexander Vladimirovich Galmukof, this silver and enamel medal comes to auction with a rather fetching photograph of the Major and is estimated at £450-550.

The sale takes place on on Friday 23rd September.