The 2016 LAPADA Art & Antiques Fair in Berkeley Square, Mayfair, opened with a dazzling preview event this week, hosted by LAPADA Chairman Lord Chadlington. Guests enjoyed champagne and a preview of objects on sale from the event’s 113 LAPADA dealers offering everything from art, antiques and design, to jewellery and decorative arts, including museum quality pieces.

The winners of the highly-contested Stand and Object Awards were also announced. 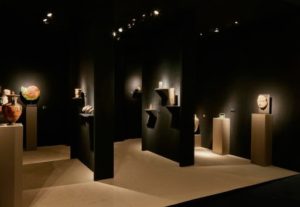 ArtAncient
For the second year in a row ArtAncient has taken the prize for Best Stand. The museum-quality display, which
still allows visitor to get close to the pieces, impressed The Selection Committee. 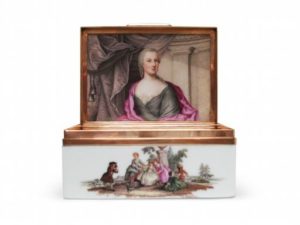 Gold-mounted Meissen snuff box, circa 1750-60
Exhibitor – Serhat Ahmet
The inside cover is superbly painted, using a fine stippling technique, with a half-length portrait of Maria
Josepha Carolina Eleonore Franziska Xaveria (1731-1767).
The daughter of Augustus III, a Duchess of Saxony, Maria Josepha became the Dauphine of France when
she married son and heir of Louis XV, Louis de France.
The Selection Committee agreed that it was historically important, a rare and fine example of its kind and that the painting was meticulously executed. 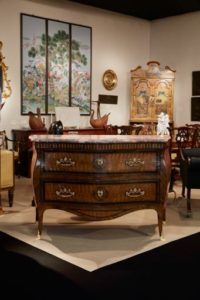 An 18th century Neapolitan commode c1760
Exhibitor – Wakelin & Linfield
An exceptional and unusually large bombe and serpentine fronted commode with original marble top.
The Selection Committee noted that it was a particularly fine example of its type in quality and condition, and felt that it was representative of the exceptional standard of furniture on display at the LAPADA Fair. 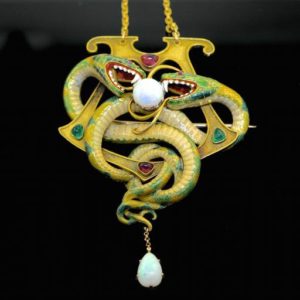 Enamel, opal, emerald and ruby serpent pendant, by Gustave Roger Sandoz, 1901
Exhibitor – Lucas Rarities
The Selection Committee choose this piece because of its exquisite combination of design, materials and superb
condition. It is a statement piece that is imbued with hidden meaning and symbolism.
The piece has a French assay for 18 karat gold, an indistinct maker’s mark and is signed on the reverse with ‘GR SANDOZ’. It comes with its original case and is on a chain. 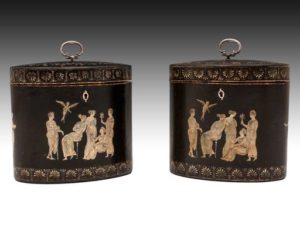 Pair of George III papier mache oval tea caddies,
attributed to Henry Clay
Exhibitor – Mark Goodger at Hampton Antiques
The caddies originally formed part of the display in the Etruscan Dressing Room at the famous ‘palace of palaces’ Osterley Park in Isleworth.
Decorated using the grisaille method, with classical figures in the Etruscan style. Each caddy is decorated with bands of classical anthemions, one has a chevron pattern, the other a floral decoration on the lid. This was
done purposely, probably to enable the caddies’ owners to distinguish between the two.
The Selection Committee was impressed with the caddies’ provenance and craftsmanship. 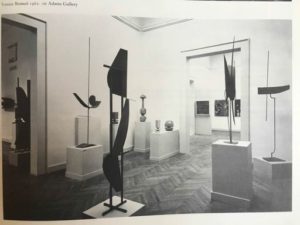 Robert Adams Plane, Curve and Circle, 1960, bronzed steel sculpture
Exhibitor – Jenna Burlingham Fine Art
A historically important piece from the artist that was exhibited at the Venice Biennale in 1962. The Selection
Committee felt that the dealer displayed it very sympathetically and in a relevant context, despite the spatial limitations of a fair stand. 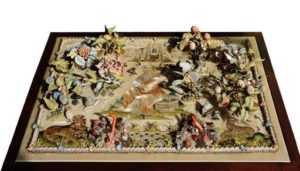 An exceptionally fine and extravagantly worked mid-17th
century raised work panel
Exhibitor – Witney Antiques
The Selection Committee noted the panel’s rarity and condition, only a few are known to exist of this standard,
other examples are held in The Metropolitan Museum of Art and Windsor Castle. It was clearly a revered piece
that has been perfectly preserved as a result. It is rich in symbolism and the quality of the workmanship is unparalleled.

Mieka Sywak, LAPADA Fair Director, commented, “We were delighted with the opening Preview, there was a great turnout and the Fair was lively. There were an impressive number of stand-out pieces on display, which generated a lot of interest, and as a result this year’s fair is set to be one of the most successful to date.”

Rebecca Davies, LAPADA’s Chief Executive, commented, “We were thrilled to have such a knowledgeable panel of judges on board and are grateful for their level of engagement and consideration throughout the selection process. It made the exercise all the more rewarding and interesting. Every year, LAPADA dealers bring an array of fascinating works in excellent-quality to the Fair, which we hope to demonstrate through these awards.”