A series of drawings that launched the professional career of fin de siècle artist Aubrey Beardsley (1872-98) are up for sale at New York’s Swann Auction Galleries on September 29th. 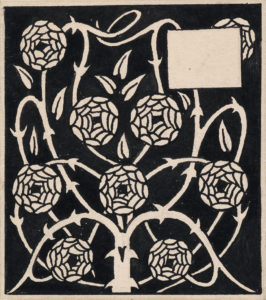 Chapter ornaments for a publication of Thomas Mallory’s medieval masterpiece, Le Morte d’Arthur, the drawings carry motifs that were to recur in Beardsley’s work throughout his short-lived career, as well as displaying the individual style that took him from the Arts & Crafts movement to the Aesthetic movement and Art Nouveau.

Fresh to the market after nearly 30 years, the works will appear in Swann Galleries’ Illustration Art auction. They are not just the accomplished creations of an emerging artist, but important historical documents casting light on a seminal moment in art history.

In his 1988 article Thomas Mackenzie and the Beardsley Legacy, art historian Colin White describes how, in 1893, the newly established publishing house JM Dent commissioned the 21-year-old Beardsley to illustrate the 12-part edition of Mallory’s work, instructing him to use woodcuts by the Pre-Raphaelite artist Sir Edward Coley Burne Jones as inspiration.

So successful were Beardsley’s initial drawings, says White, that they enraged William Morris, the leader of the Arts & Crafts movement, in whose Kelmscott Press volumes the Burne Jones woodcuts had appeared. Morris saw Beardsley’s work as little more than plagiarism of the Kelmscott house style.

Eventually overcome with enormity of the task ahead of him, Beardsley started to fill in areas of detail with black, emulating Japanese woodblock prints, an exercise that led him to experiment with a new style and direction in his work.

With a provenance directly back to JM Dent, this is the first time that the drawings offered in the Illustration Art sale have appeared at auction since 1988.

The first up for sale is Rose Bush, shown above, an ornamental device for Book VI, chapter VI of Le Morte d’Arthur. In pen and ink on paper, it comes estimated at $3,000 to $4000. The rose is a recurrent symbol for decadence in Beardsley’s work, and the almost abstract nature of this design shows the mastery of his hand.

The following lot is another ornamental device, this time of Three Stylized Clematis Flowers, created for Book VI chapter XVIII, and it carries the same estimate.

The slightly smaller ornamental device for Book VI chapter XII is of Four Large Lillies and is guided at $2,000 to $3,000, while the final lot, encompassing two slightly cruder ornamental devices, Dog Roses, and Three Stylized Leaves, for Book II, chapter VI and VII are being offered together at $1,200 to $1,800.

By coincidence, the sale also features a stunning watercolour illustration by Thomas Mackenzie (1887-1944), the greatly admired Bradford-born contemporary of Beardsley.

Mackenzie illustrated works such as Arthur Ransome’s Aladdin and his Wonderful Lamp in Rhyme and Arthur and his Knights, by Christine Chaundler. He landed his first commission, The Crock of Gold, an Irish folk tale by James Stephens, after the intended illustrator, Arthur Rackham, died.

Mackenzie’s richly coloured, dreamlike illustrations evoke a sense of magic and other-worldliness that echo both Rackham and Beardsley. The lot on offer here shows why he is ripe for rediscovery by a wider audience.