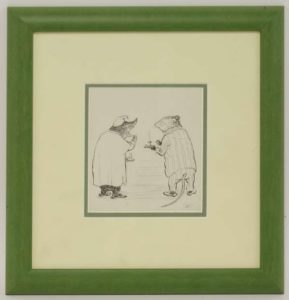 A pen and ink illustration by Ernest Howard Shepard, best known for his anthropomorphic animal characters in Kenneth Grahame’s The Wind in the Willows and A.A. Milne’s Winnie-the-Pooh, has sold in Sworders’ Books and Maps Sale for £15,400.

The image features the two popular characters seen from behind and dressed in their nightwear.