A long lost classic British Vincent motorbike could make motorcycle history when it comes up for sale next month. 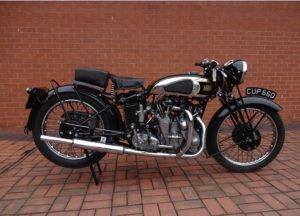 Recently discovered among a job-lot collection in Japan, the bike is returning home to be sold by H&H Classics in November, with high hopes it could speed past the current record for a classic Vincent that stands at £210,000.

Mark Bryan says, “The Series-A Rapide is seen as gold dust. Vincent was a small manufacturer in competition with Brough, but Vincent, unlike Brough, built their own engines. These bikes are incredibly collectable and in value they are closing in on the Brough. The strength of the vintage motorcycle market has been growing year on year, and does not seem to have been hindered by the current economic slow down.” He believes the future will see more record-breaking prices posted.

Only 78 of these bikes were produced between 1936 and the summer of 1939, and it is estimated of these just 50 survive today.  Nicknamed the ‘plumbers nightmare’ because of all of its external oil pipes the Series-A Rapide produced 45bhp at 5,500 rpm from a 998cc V-twin. It hit top speeds of 110mph, making it one of the fastest bikes of its generation.