A Nobel laureate’s extraordinary group of awards and medals, including an extremely rare Order of Merit insignia, will come to auction in December at Sworders of Stansted Mountfitchet, UK.

The group, which also includes a copy of the Nobel Prize Medal for Chemistry, belonged to Sir Robert Robinson OM FRS (1886-1975), the pioneering organic chemist, whose work led to the successful production of anti malarial drugs. 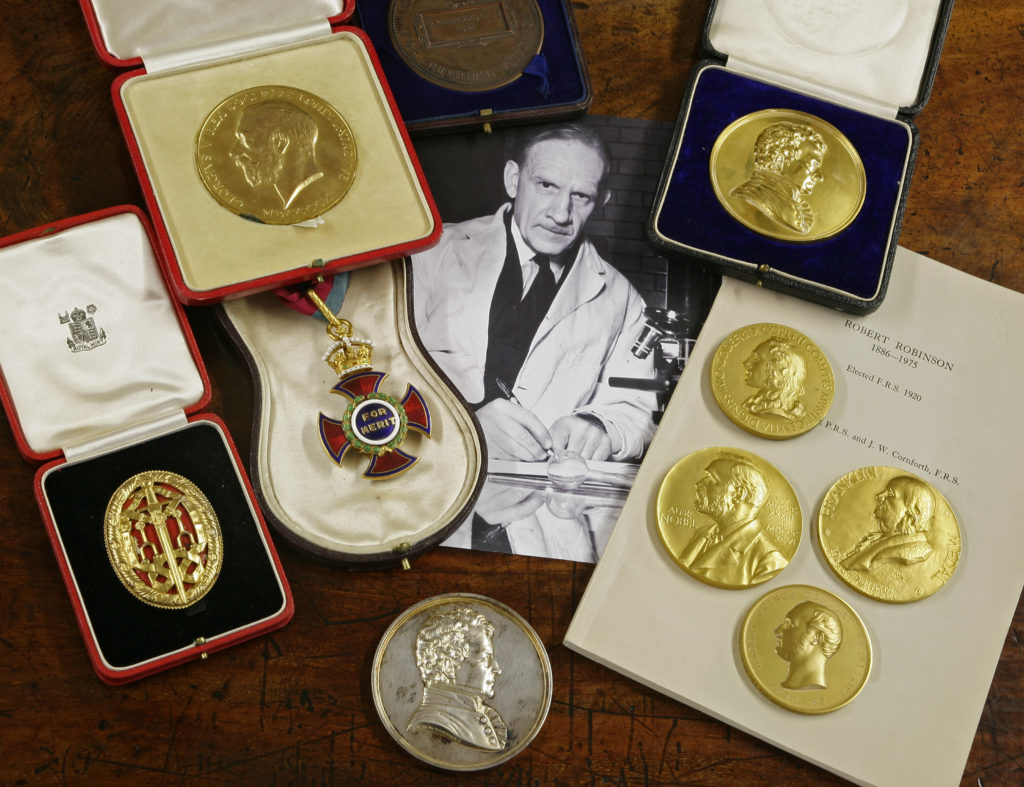 Sworders will offer, as a single lot, a group of more than 30 medals, honours and awards. They include Robinson’s George VI Order of Merit; the gilt medal copy of his Nobel Prize in Chemistry, 1947; the Franklin Medal, 1947; the Faraday Medal, 1947; the French Commandeur de la Légion d’Honneur; and his Knight’s Bachelor badge. The estimate is £6000-8000.

Other lots include an inscribed silver-mounted Freedom Casket for the Borough of Chesterfield from 1947 (£1000-1500) and Robinson’s lacquered brass monocular microscope (£600-800).

Two papers published by Robinson in the 1920s remain major source works today on ‘electronic theory’. The second of these introduced the curly arrow symbol as a device to represent electron movement in conjugated organic molecules. And he also invented the symbol now used for benzene. Together the papers launched a major transition in the field of organic chemistry.

Robinson’s extensive work on alkaloids (plant-based substances often having profound effects on the human body) and organic reactions led to the production of antimalarial drugs while determining the chemical matrix of penicillin, benzene, morphine, cocaine and strychnine and others.

Born and educated in Derbyshire, Robinson graduated from Manchester University gaining BSc in 1906 and DSc in 1910.

He attained a plethora of awards and degrees, was a Fellow of the Royal Institute of Chemistry and became President of both the Chemical Society and the Royal Society. He sat on more than 30 government committees, a number of which he also chaired, was UK delegate to the first UNESCO Conference in 1947 and a director of Shell.

Among his honours, he was Ambassador for Science and held the Legion of Honour, the Freedom Medal and many awards for chemistry both from Britain and the wider world.

In his leisure hours he became President of the British Chess Federation and co-authored the book The Art and Science of Chess.

The legacy of Robert Robinson is of immense importance and reflected in the number of buildings and laboratories named after him.

“Quite apart from the unique and astounding archive of material associated with one of the nation’s most brilliant minds from the last 100 years, the list of scientific honours included in this consignment would make it the pride of any institutional collection,” says Sworders director John Black.

“For independent collectors, too, the extremely rare chance to secure both the insignia of the Order of Merit and a copy of a Nobel Prize medal alone make this group an enticing prospect, but when you add the more than two dozen other outstanding awards, you really have to wonder whether anything else will ever come close.”