A rare and fine mystery clock made by an inventor, clockmaker and showman who inspired celebrated escapologist Harry Houdini will be part of Chiswick Auctions‘ European Works of Art and Clocks Sale next month. 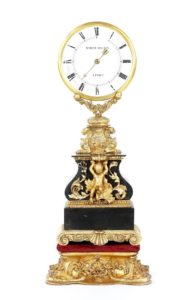 The clock, made by Jean Eugene Robert-Houdin during the 19th century, is one of only a select few ever to be offered at auction in the world.

It’a said that every magician of the 20th century is ‘haunted’ by Robert Houdin, his techniques and showmanship cast a shadow over all future conjurers. In fact, Harry Houdini was so in awe of Houdin that he changed his name from Ehrich Weiss to Harry Houdini in homage to the great master, for he erroneously believed that adding an ‘I’ to the end of a name meant ‘like’ in French.

A few similar examples of his clocks have been sold in New York in recent years, but genuine clocks of this type, belonging to Houdin’s second series, with a transparent, circular dial have not been seen on the London auction market for many years. 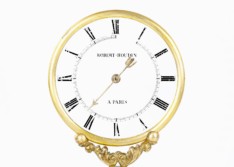 Jean Eugene Robert was born in Blois, near Paris, which had been a centre for clock and watchmaking for centuries; his father was a watchmaker and so naturally he began his career also in this trade. In 1830 he married Eglantine Houdin, the daughter of Jacques Houdin, a prestigious horologist who had studied under arguably the greatest watchmaker of all time, the great Breguet. Jacques Houdin had a shop in Paris which specialised in precision instruments, and the young Jean Eugene Robert was so impressed by his father-in-law’s work that after the marriage he took his name and became Robert Houdin.

In 1831 Robert Houdin began to develop the first mystery clocks. Between 1831 and 1844 he produced five distinct types all functioning in slightly different ways and for different effect.

The present clock belongs to the second series, which have transparent dials and a single hand that appears to move of its own accord. When one of these mystery clocks was exhibited in London in 1838, it is said spectators were amazed and could not work out how the hand moved, many speculating that the clock was driven with magnetism. In 1839 Robert Houdin exhibited some of his mystery clocks at the Exhibition of French Industry, and won a bronze medal. 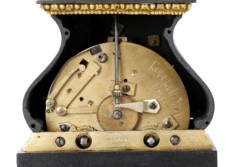 By the 1840’s he was also producing automaton, one of which won him the silver medal at a National Industrial Exhibition in 1844. This resulted in specific commissions for such pieces from conjurers and other showmen such as Phineas Barnum, who toured the world with Houdin’s machine for twenty years.

This success helped to introduce him to the world of magic and conjuring, and by 1845 he had fulfilled a childhood dream and opened his own theatre show at the Palais Royal ‘Les Soirees Fantastiques Robert – Houdin’. His show was unique in that it incorporated traditional conjuring tricks with his own automatons to create magical effect.

It proved to be immensely popular, so much so that by the 1850’s he was performing private shows for Queen Victoria at Buckingham Palace. His clocks, automatons and other inventions became world famous, and he is now widely considered to be not only the inventor of the first mystery clocks but also perhaps more importantly, the father of modern magic and conjuring.