One of the rarest pieces of Irish silver ever to come to market will be offered at auction later this month in Essex, where it is expected to fetch thousands of pounds. 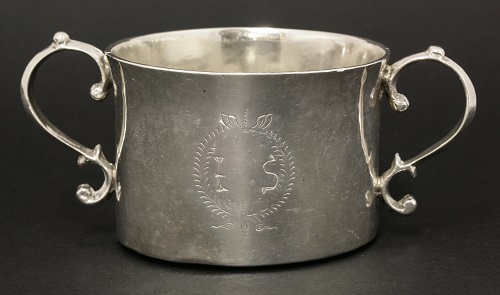 On November 30, Sworders of Stansted Mountfitchet will offer ‘the IS porringer’, an inscribed shallow bowl made in Dublin c.1659-63 and thought to be the second oldest known piece of Irish secular plate.

Only a handful of pieces of Irish secular silver are known to survive from before the Restoration.

Among the tiny corpus of pre-1660 domestic wares published in Tony Sweeney’s catalogue raisonné of Irish Stuart Silver (1995) is this austere porringer from the end of the Commonwealth period. It was shown by dealers How of Edinburgh at The Antique Dealers’ Fair & Exhibition at London’s Grosvenor House hotel in 1967 priced then at £3000.

Dubbed ‘the IS porringer’ on account of its engraved initials, it was pictured in an advert in Connoisseur magazine in September 1967 together with the line: ‘There would appear to be only one earlier piece of Irish secular plate at present recorded’. At the time, only a table salt made in Dublin c.1640 by the English migrant goldsmith George Gallant was thought to pre-date it.

The whereabouts of the IS porringer was unknown for almost 50 years until earlier this year when Sworders were invited to appraise items of silver from the family of Colonel SL Bibby CBE.

Little is known about Colonel Bibby, but his was once a collection of some note. On the recommendation of legendary dealer Jane Penrice How (1915-2004), seven pieces from Bibby’s holdings were included in the magnificent exhibition Seven Centuries of English Domestic Silver held at the Royal Ontario Museum in 1958. Bibby’s granddaughter, too, has fond memories of family meals in a dining room sparkling with Stuart and Georgian table silver.

Sadly much of the collection was subsequently stolen, and the porringer is among just eight lots that remained with the family to be sold in Essex on November 30. Its credentials and significance had been lost across the previous half century. However, with the help of the National Museum of Ireland, Goldsmiths’ Hall in London and Irish silver academic Dr Thomas Sinsteden, Sworders’ silver specialist Anita Anderson was once more able to piece together its collecting history. In particular, blow-up photographs allowed the largely obscured marks to be read as the harp of Dublin, the date letter ‘B’ for 1659/63 but Sworders have been unable to identify the marker’s mark. The auctioneers expect the rare survivor will attract considerable interest at its estimate of £4000-6000.

Also on offer at Sworders is a pair of early Charles II trefid spoons that Col Bibby also acquired from How of Edinburgh. Marked with the initials IK over a rosette for the specialist spoon maker John King, London, 1664 and engraved to the terminals with the coat of arms of the Pyrat family, one of the pair was illustrated in English and Scottish Silver Spoons, Mediaeval to Late Stuart by Commander GEP How (1953) when already part of Bibby’s collection.

They are among the earliest known spoons of a type that became commonplace in the 1670s and their survival confirms that the trefid – known at the time as ‘French spoons’ – arrived in England from the continent very shortly after the Restoration.

This pair is in almost mint condition. So well struck are the marks that it is possible to see clearly that the date letter G includes a small pellet in its design – an unusual addition that hints at the scandal that forced a change of assay master at the Goldsmiths Company midway through 1664.

The newly published book Silver Spoons of Britain 1200-1710 by David Constable (2016) discusses a spoon sharing the same marks and crest. Clearly, the duo, which carry a competitive estimate of £1200-1500 at Sworders in November, were once part of a set of six or more.