Almost a millennia of human history will be on display in Dreweatts & Bloomsbury‘s Western and Oriental Manuscripts and Miniatures sale next month. It will also see the first reunification of Islamic and Near Eastern manuscripts with western manuscripts at an auction for 50 years.

The whole sale will feature 123 lots, spanning almost a thousand years of human history, with highlights such as:

Bede’s Homilies on the Gospels in Latin (estimate £5,000 – 7,000). This remarkable fragment dates back to the second or third quarter of the ninth century. No copies of the text survive from England before the twelfth century, with this fragment having origins from Germany, most likely Fulda. In a letter written in 747-751, St. Boniface requested from one of Bede’s students and followers, Archbishop Egbert of York, “some of the works which Bede has composed” including “his book of homilies for the year, because it would be a very handy and useful manual for us in our preaching”. This may be a cutting from an immediate descendent of the manuscript sent. Another leaf sold at auction in 2010, and is now in Durham University Library. 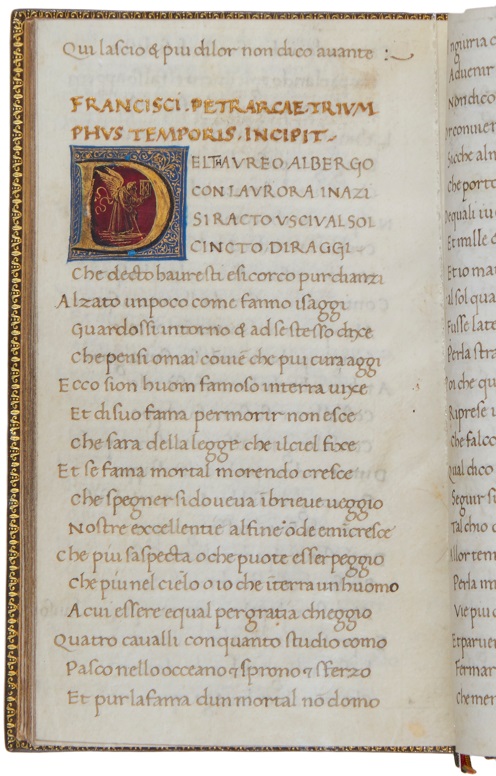 A finely illuminated humanist manuscript of Trionfi (estimate £10,000–15,000) by the Italian poet and scholar, Francesco Petrarch (1304-1374). Petrarch, credited as being the father of the Renaissance, was the first poet laureate of Italy since the Roman Empire. The manuscript, likely from Florence and dated circa 1480-90, is written in a strikingly elegant hand by a known scribe who worked for a number of the greatest ducal and royal courts during the Renaissance. It is likely that the manuscript was originally commissioned as a luxury, pocket-copy of the Trionfi for a wealthy client with an interest in Italian literature. 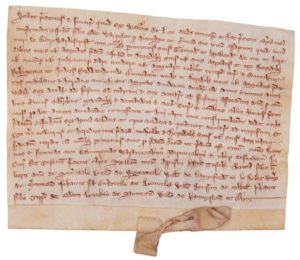 A manuscript document in Latin circa 1280 recording a grant of land in Derbyshire includes a rare clause excluding the future sale of the land to “the religious or the Jews” (estimate £600 – 800). The specification that the lands here could not be sold to religious communities was most probably to avoid their being alienated into Church ownership permanently. However, the extension of this clause to the Jews can be seen as an early record of anti-Semitism in the terrible climate of growing fear and uncertainty which lead up to Edward I’s edict of expulsion in 1290. 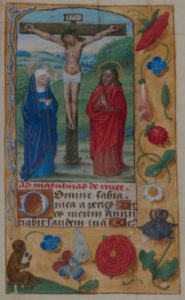 A beautiful Book of Hours in its original binding dated circa 1500 from the Netherlands (estimate £18,000–25,000). The three large and nine small portrait miniature paintings in the manuscripts have been firmly attributed to the important artist, the Master of James IV, now known as Gerard de Horenbout (circa 1465 – circa 1540). Quirky additions to the border decorations include a series of apes, ‘aping’ human activities. Examples include an ape in an apron nursing a baby, another playing a harp and one with a missing limb on crutches receiving alms from a wealthy ape. Gerard de Horenbout worked for a wealthy, international clientele and contributed to some of the most celebrated illuminated manuscripts produced in his lifetime, including the fabulously opulent Rothschild Prayerbook (last sold in 2014 for £13,605,000). 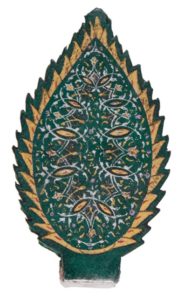 From the Oriental section of the sale, a miniature leafshaped Qur’an, copied by Mohammad Saleh Taom Zadeh, in Arabic is another key highlight (estimate £4,000–6,000). Striking for its remarkable design and measuring just 72mm x 40mm, this copy of the Qur’an is dated 1284 AH (1867/68 AD) and unusually illuminated in silver, rather than gold. The text is elegantly laid out mimicking the veins of a real leaf, and the miniature is stored in a bespoke box. The breathtaking design details point to the quality of this manuscript and the wealth of the patron who commissioned it. Only two comparable Qur’ans have appeared on the open market in recent decades. 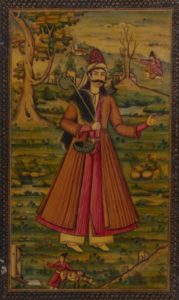 From Persia, Kolliyat by Muhsin al-Din Sa’adi Shirazi, “Sa’di” (estimate £10,000–15,000), dated 1243 AH [1827-28 AD]) serves as another standout illuminated manuscript from the Oriental section. Sa’di is one of the most revered poetic and prose writers in Persian history, and here the text is surrounded with gold detailing creating a cloud-like effect on the page. Most interestingly, this has provenance from the library of Shahzadeh Khanlar Mirza, the 17th son of Crown Prince Abbas Mirza of the Qajar dynasty. Shahzadeh Khanlar became one of the most prominent princes of his generation. Notably, he became Nasser al-Din Shah’s chief commander in the Anglo-Persian war of 1856. Inside the lacquered outer boards are two fascinating and detailed depictions of an old and young man set against idyllic pastoral backgrounds. 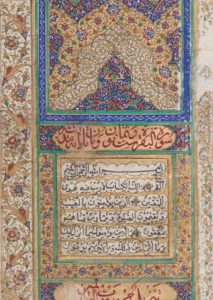 A miniature Qajar Qur’an from Persia in the mid-nineteenth century (estimate £4,000-6,000). This intricately decorated, pocket-sized prayer book was probably commissioned by an aristocrat for the purposes of Hajj. It is stored in an accompanying leather carrying pouch of contemporary design with silk-lining and leather strap (detached on one side) which would have made it easily transportable during pilgrimage.