This view of Westminster from Waterloo Bridge dates to 1842 and is one of 26 hand-coloured lithographs in Thomas Shotter Boys’ deluxe issue of Original Views of London As It Is.

The view is historically important because it shows the early stages of the construction of the new Houses of Parliament, as designed by Sir Charles Barry, following the 1834 fire which destroyed much of the earlier structure. 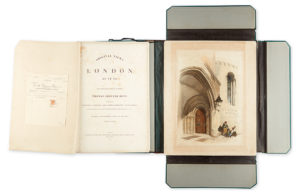 Construction on the new palace had begun only two years before Boys (1803-74) painted this view. In the central distance, against the backdrop of Westminster Abbey, with Westminster Bridge in the foreground, it is possible to see Westminster Hall, built in 1097, which survived the blaze and remains standing today.

The clocktower – renamed the Elizabeth Tower in 2012 – housing Big Ben, was not completed for another 17 years, while the finishing touches to the famous Gothic Revival river frontage and interiors took place in 1870.

The wharf and buildings to the left of the picture have since been replaced by County Hall, which housed the old GLC, the South Bank Centre, including the Royal Festival Hall, and, of course, the Millennium wheel which now dominates this stretch of the Thames.

Just visible atop what was then a brewery is the South Bank Lion, which survived the changes and now stands facing the other way on the south side of Westminster Bridge.

To the right of the picture is the view of the Thames prior to the construction of the Embankment, which started in 1862, designed by Sir Joseph Bazalgette as he introduced the capital’s new sewage system.

This is only the third copy of the deluxe issue of Thomas Shotter Boys’s Original Views of London As It Is to come to auction in the last fifty years. The current copy, in its original state with 26 hand-coloured lithographs is considered to be the finest lithographed plate book on nineteenth century London at a time when good pictorial records were few.