A silver tankard given to one of the UK’s most famous eighteenth century man of letters, Dr Samuel Johnson, is to be sold at Hansons Auctioneers in Derbyshire with an estimate of £4000-£5000 later this month. 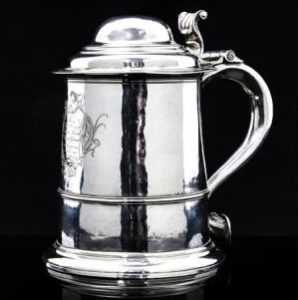 Dr Samuel Johnson (1709-1784) achieved fame as writer of the first English dictionary which was published in 1755.  Famously portrayed on the screen in Blackadder by Robbie Coltrane, it is certainly known that he enjoyed a tipple, so it’s appropriate that the tankard was discovered on an antiques valuation day in an eighteenth century pub in Lichfield, the town where Johnson was born.

Of typical 18th Century design with a hinged lid the solid silver vessel bears the hallmarks of Richard Bayley and was made in London in 1735.  A fine but not particularly unusual piece 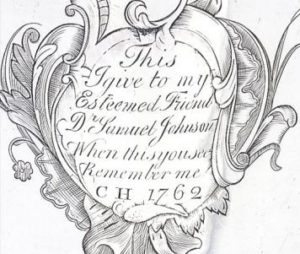 but what makes it stand out from the crowd is the inscription on the main body which reads: ‘This I give to my Esteemed Friend D. Samuel Johnson.  When this you see Remember Me. C.H 1762‘

It is thought that it was gifted to the great man by one Charles Hitch who was a bookseller in London circa 1733-1764.  He was one of the publishers of Dr Johnson’s Dictionary in 1755 and it is probable that this tankard was a gift from him. There are a few business reference to Hitch in Johnson correspondence.

The tankard was discovered at the historic Hedgehog Inn in Lichfield where Hansons Auctioneers hold their weekly free valuation days. The sale takes place on 20th December.