An important collection of Roman bronze coins formed by a connoisseur before and during the Second World War will be back on the market for the first time in 75 years when it is auctioned by Dix Noonan Webb, the international coins, medals and jewellery specialists, in London on 15 February 2017. The collection, which will be sold in 194 lots, is expected to fetch up to £250,000.

The coins in this collection were assembled over a remarkably short period of eight years from 1933 to 1941, some of them being bought at London auctions during a time when the capital was under attack from the German Luftwaffe. The anonymous connoisseur was assisted by the renowned experts Herbert Seaby and Leonard Forrer as he brought together a group of Roman bronze coins that has been unavailable for study for three-quarters of a century.

Many of the coins have distinguished provenances. The connoisseur was a successful bidder at the London auctions of the collections of Christopher Corbally Browne and, most notably, the Rev Edward Sydenham. Among the lots are pieces from the great continental sales of the 1920s and 1930s, including the collections formed by Clarence Bement, Franz Trau, Sir Arthur Evans, Captain Edward Spencer-Churchill, Howard Levis and Paul Vautier. The star item in the collection is a an extremely rare Sestertius from the brief reign of Divus
Titus, who was Roman emperor from AD 79 to AD 81. It is one of the most important Roman bronze coins available to the market with only 10 specimens of this type known, of which seven are in museums. It is a full grade finer than the only other example sold recently. 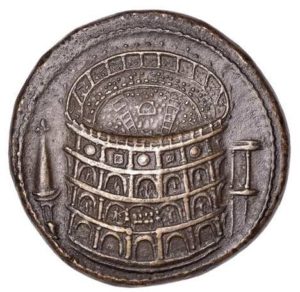 The posthumous coin dating from cAD 81 to AD 82 depicts the recently-completed Coliseum, which had been finished during the reign of Titus. The coin, which the collector bought in February 1939, is expected to fetch £60,000 to £80,000.

Other highlights include a Sestertius from the brief reign of Vitellius, who was emperor for eight months in AD 69. This extremely rare coin was part of several famous collections in the early part of the 20th century but was last on the market in May 1940. An impressive piece celebrating the end of the civil war of AD 68 to AD 69, it is estimated at £4,000 to £6,000.

Another Sestertius depicting the emperor Hadrian addressing his British troops and dating from AD 134 to AD 138 is expected to sell for £3,000 to £4,000. When it was last sold as part of the Drabble Collection in July 1939, the cataloguer, Albert Baldwin, described it as “possibly the finest known specimen”. The design of Hadrian haranguing his soldiers is found on a series of bronze coins from the mid-130s but the British issue is one of the rarest.