A beautiful portrait of a young woman that was once viciously slashed with a knife in an apparent act of revenge is to be displayed at The Chelsea Antiques, Art & Design Fair next month, with London exhibitor Nicholas Bagshawe keen to know if anyone can shed light on the gruesome story. 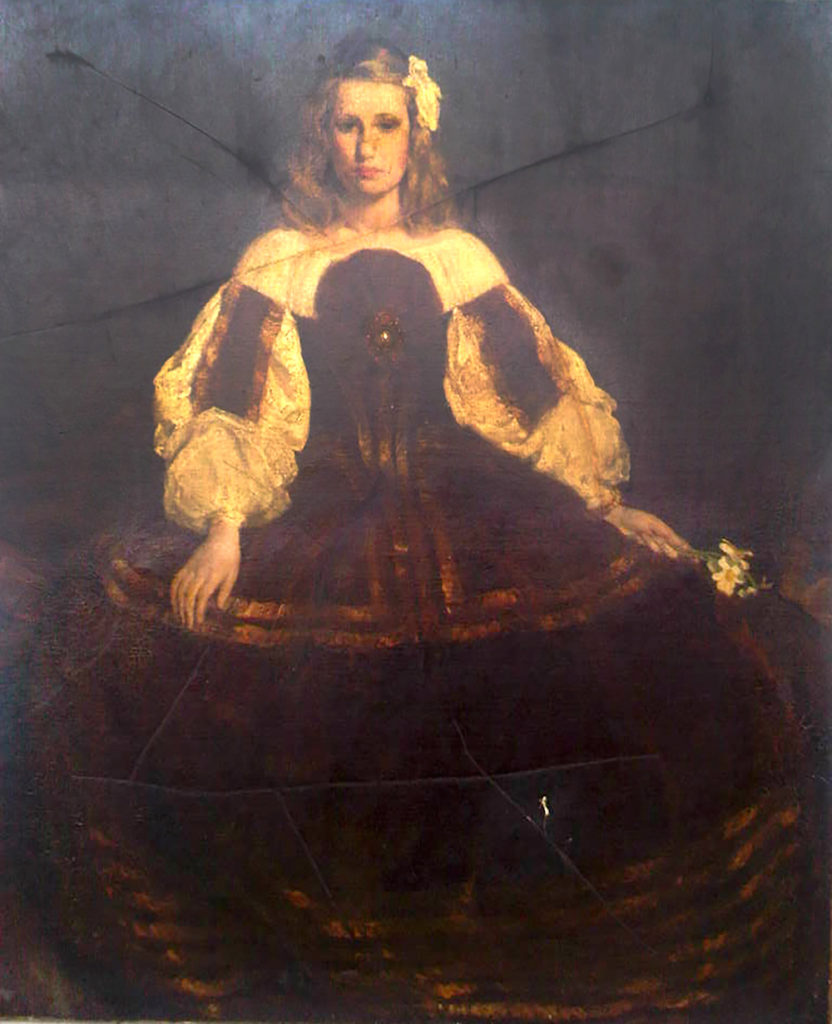 Nicholas acquired the portrait painting from a couple who was given it when an old music society they were members of closed down. It shows a luxuriously attired pretty young lady holding flowers. The painting needed much cleaning and restoration.

Nicholas explains, “After the initial clean it became clear that the picture had once been very crudely restored to cover up how the canvas was viciously slashed with a knife, particularly aimed at the girl’s throat. Someone held a very serious grudge against the girl!”
He continues, “Now it would be most interesting to know if anyone can shed light on the mysterious story of the girl and the painting. She is clearly someone who was notable to have been painted by such a well highly regarded portrait painter.”

Once cleaned and properly restored, the painting has been returned to its former glory. It is by the artist Thomas Cantrell Dugdale R.A. R.P. (1880-1952) and is titled Homage to Velasquez, since the subject is dressed as a Velasquez infanta. It will be on sale at the Chelsea fair for £18,500.

Thomas Cantrell Dugdale was a highly competent and multi-faceted artist who recorded much of British life in the first half of the 20th century. Born in Lancashire he studied first in Manchester, then in London and finally in Paris. He served in the yeomanry from 1910 and was out in Egypt and Palestine during the First World War. A number of his works from that period are held in the Imperial War Museum.

Between the wars he developed a practice as a portrait painter and many of these pictures are now in public collections. Memorable amongst them are portraits of Field Marshal Slim, the painter Adrian Stokes, actresses Vivien Leigh and Wendy Hiller and, late in life, Princess Margaret.

Alongside the portraiture are beautiful nude figure studies reminiscent of William Orpen, paintings of country folk and their practices which hint at an understanding of Stanhope Forbes or Harold Harvey and also a number of multi-figured scenes showing Londoners going about their 1920’s or 30’s business on the tube, in cafes etc. After the Second World War he was commissioned to paint a substantial number of portraits of RAF officers, most of which can
be seen today at the RAF Museum. He was elected member of the Royal Society of Portrait Painters in 1925 and a full Royal Academician in 1943.

This beautifully handled portrait of a young girl dressed as a Velasquez Infanta is undated, but must come from the very early years of Dugdale’s career as a painter. There is a distinct Edwardian feel to the rich, dark palette and the bold brush-stroking, reminiscent of the work of the portrait painters Sargent and De Laszlo. Similarly in the very early years of the century, the use of historic costume as a form of ‘artistic fancy dress’ was in vogue with painters like Augustus John. In this instance the unusually pronounced composition, with the costume filling the whole of the bottom part of the canvas, suggests also the work of John Lavery or perhaps more specifically in this case – Sir William Nicholson.

The painting will go on display at The Chelsea Antiques, Art & Design Fair at Chelsea Old Town Hall from 15th – 19th March 2017.