While barn finds have long been considered the holy grail of motoring discoveries, Bonhams has unveiled a collection of 12 classic cars all unearthed in a ‘castle-find’ Swiss schloss. 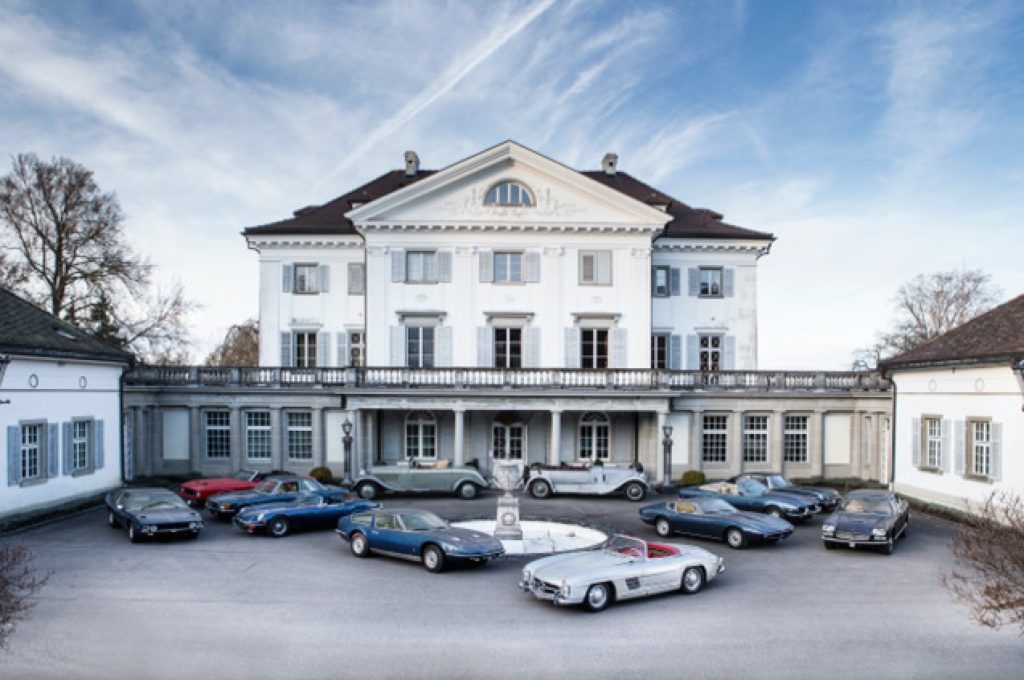 Amongst the dozen-strong collection are examples of some of the world’s most iconic classic models, including a 1958 Mercedes-Benz 300SL Roadster (€600,000-800,000). The model celebrates its 60th anniversary in 2017, and remains arguably one of the most influential post-war sports cars ever created. It was originally developed as a road-going version of Mercedes’ hugely successful W194 racing car. Losing the ‘gullwing’ doors allowed the roadster to develop in to a truly driveable supercar with improved handling, access and suspension.

Another legend of the motoring world is a 1921 Rolls-Royce 40/50hp Silver Ghost Double Phaëton (€600,000-800,000). Proclaimed by Autocar in the early 20th century as ‘the best car in the world,’ it is the last word in motoring luxury and perhaps the most influential automobile from the early days of motoring. Whisper-quiet yet capable of long-distance touring, the Silver Ghost is a feat of British engineering which remains a highly sought-after addition to any serious motor car collection. A 1934 Rolls-Royce Phantom II (€80,000-120,000) was also uncovered, the last of the marque’s 40/50hp models. Essentially a refinement of the Phantom I, several improvements were made to the model such as a brand new chassis design and added synchromesh on the high gears for a smoother driving experience.

Described by Ferruccio Lamborghini as ‘my Rolls-Royce; still quite fast but also large and comfortable,’ the four-seater GT Espada (€70,000-110,000) is as close to a family-friendly supercar as you can get without compromising on the devilish design the Italian marque is so renowned for. Designed by Gandini at Bertone, the Espada was the most successful Lamborghini model until Countach production was expanded in the mid 80s, and with a top speed of 155mph, it was, at the time of production, the fastest four-passenger motor car in the world.

Two 4.9-Litre Maserati were also uncovered from the Swiss schloss: an Indy America (€50,000-80,000) and a Ghibli SS (€100,000-150,000). The latter is the fastest road car ever produced by Maserati, capable of an astonishing 174mph (280 km/h). Characterised by its low ‘shark-nose,’ it was designed by Giorgetto Giugiaro towards the beginning of his career whilst he was still at Ghia, and his cunning inclusion of two bare-boned cushioned cut-outs in the rear allowed the car to be marketed as a 2-door 2+2 coupé.

The Aston Martin V8 first appeared in 1970, and the DBS V8 was met with such success that a convertible model was always considered. The marque was initially concerned about building such a high-powered convertible, but in 1978 they eventually saw the light and created what became the most successful Aston Martin ever, enjoying a record-breaking production run with 2,919 cars sold. This 1980 Volante (€90,000-140,000) manual transmission version is the ultimate in soft-top luxury and with a 150mph top speed, it ranked among the world’s fastest convertibles at the time. Described by former Aston Martin Chairman Victor Gauntlett as ‘a stylish thoroughbred, beautifully built, luxurious, fast and immensely safe,’ what’s not to love?

Also discovered at the castle were:

The cars will go on sale at Bonhams Spa Classic sale on 21 May at the legendary Francorchamps circuit in Belgium.