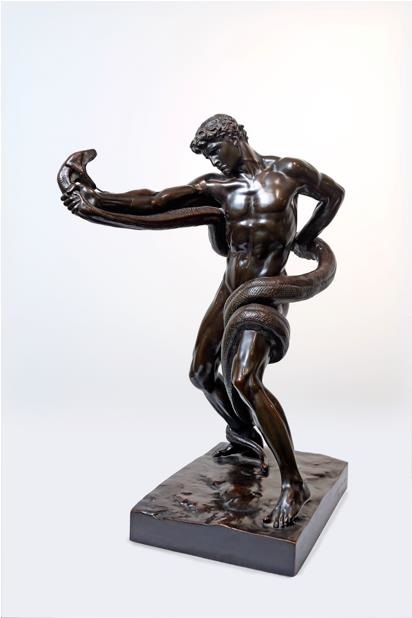 An important bronze statue by Frederic, Lord Leighton is one of the leading pieces to be offered in Bonhams inaugural Important Design Sale in London next month.

This very rare piece by the pioneer of the late 19th century British sculpture movement known as New Sculpture, is a bronze reduction of the full scale work dated 1877 and now in Tate Britain in London. It was considered at the time to mark a renaissance in British sculpture.

Smaller versions of well-known sculptures were often commissioned by wealthy patrons as status symbols but, in the words of the Head of Bonhams Works of Art and Sculpture, Michael Lake, “This is an extremely rare reduction. In all my years of looking at Leighton’s works I have never seen another.”

The sculpture was acquired at a Country House auction in 1934 for fifty-seven shillings and 17 pence (just under £3 in today’s currency) and has been in the possession of a family in Cheshire ever since.

Important Design is curated by Bonhams UK Head of Decorative Arts, Mark Wilkinson, who explained the thinking behind the new concept. “Important Design brings together in one sale more than 500 years of excellence in furniture and the decorative arts.  Modern collectors and interior designers want to mix styles, makers and periods. By offering a carefully curated selection of objects, we aim to satisfy this growing demand, and to attract buyers who may not necessarily be collectors of a specific genre but are interested in purchasing a unique piece.”