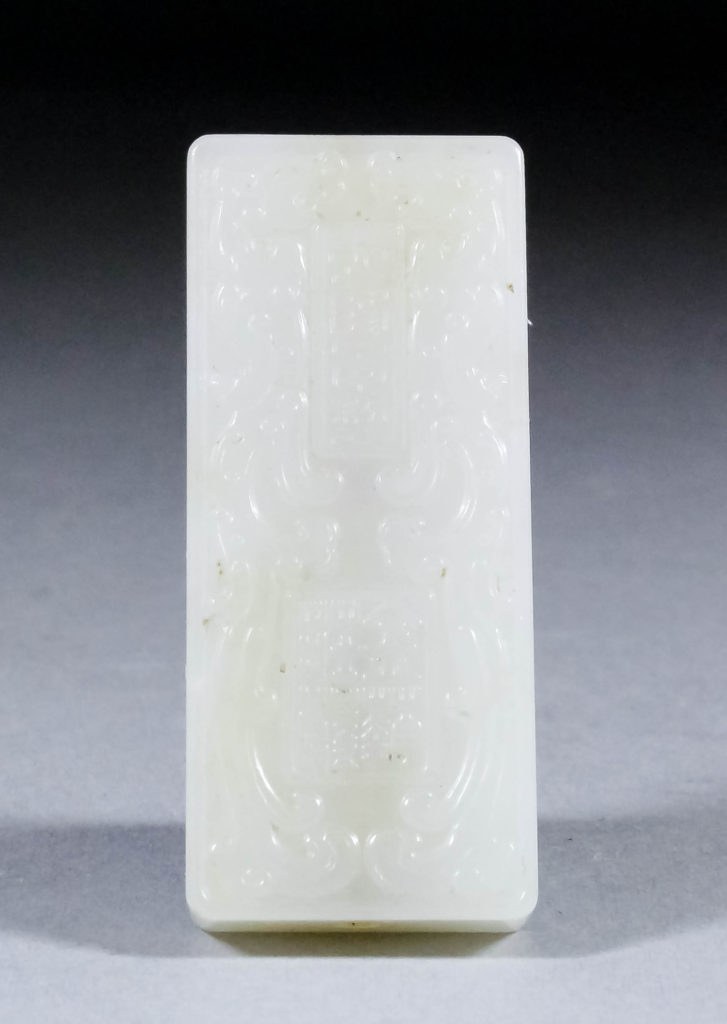 The Canterbury Auction Galleries‘ recent sale’s unexpected star was a tiny white jade tablet, carved on each side with the heads of mythical beasts and panels of Chinese characters, which sold for £14,500.

The antique tablet or plaque measured just 55 by 23 millimetres (2.125 x .875 inches) and was drilled with a fine hole from top to bottom, perhaps indicating that it had once been worn as a pendant.

There was no doubt as to the purpose of a late Victorian gold and silver-mounted diamond heart-shaped pendant, the central stone surrounded by a border of 15 old cut diamonds with a total weight 6.1 grammes. Retailed by high-class Bond Street jewellers, Tessier, and contained in one of their green leather fitted cases, it was purchased by a local buyer for his wife for £8,600. 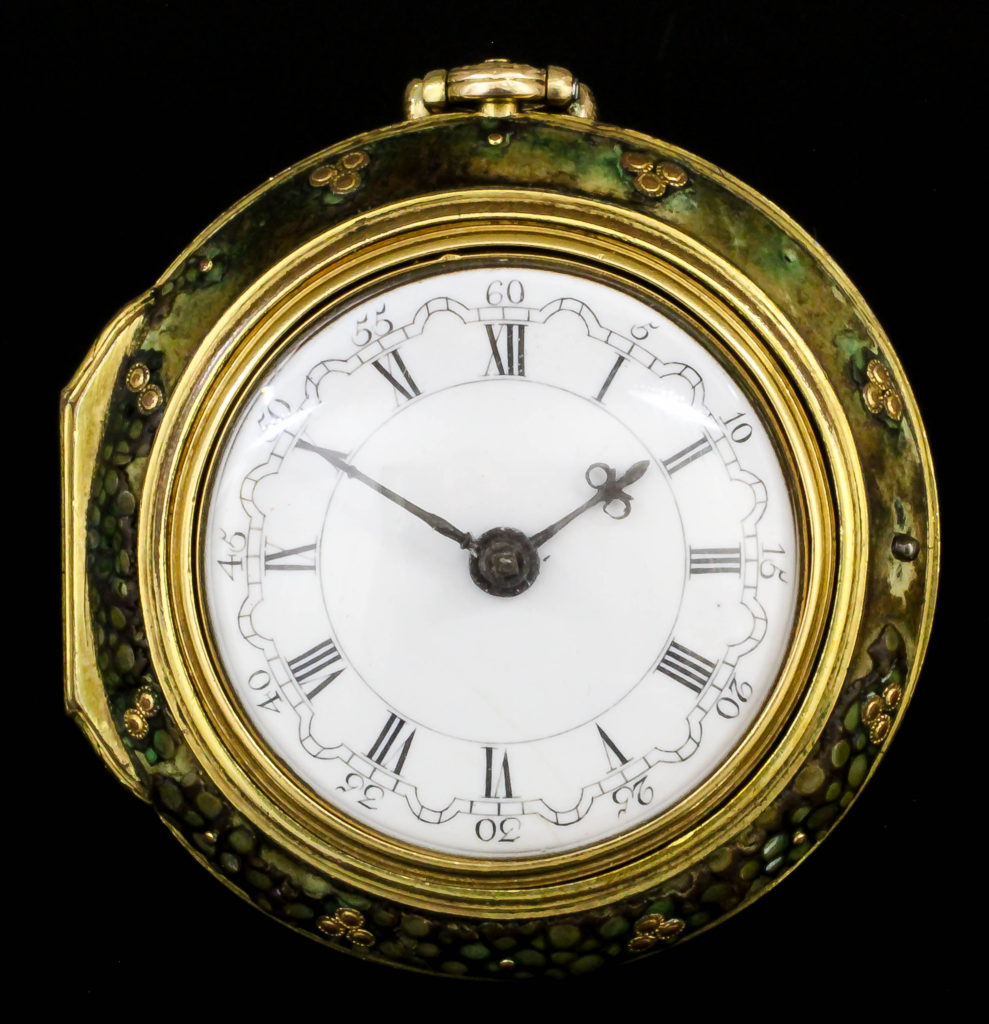 The much anticipated highlight of the sale was the dispersal of 32 pocket watches and 23 carriage clocks sent for sale by the family of Kent horologist Ray Butcher. It realised a total of £31,950, the most valuable single lot, a good mid-18th century gold coloured metal repoussé (hammered) gilt metal and shagreen covered triple-cased verge pocket watch by John Cater of London, selling for an above estimate £1,950.

A small collection of early 20th century German works on paper sold for a total of £5,700. Some were pencil and charcoal drawings by August Macke (1887-1914), one of the leading members of Der Blaue Reiter (The Blue Rider) an art movement, which helped found German Expressionism. The most valuable of the six 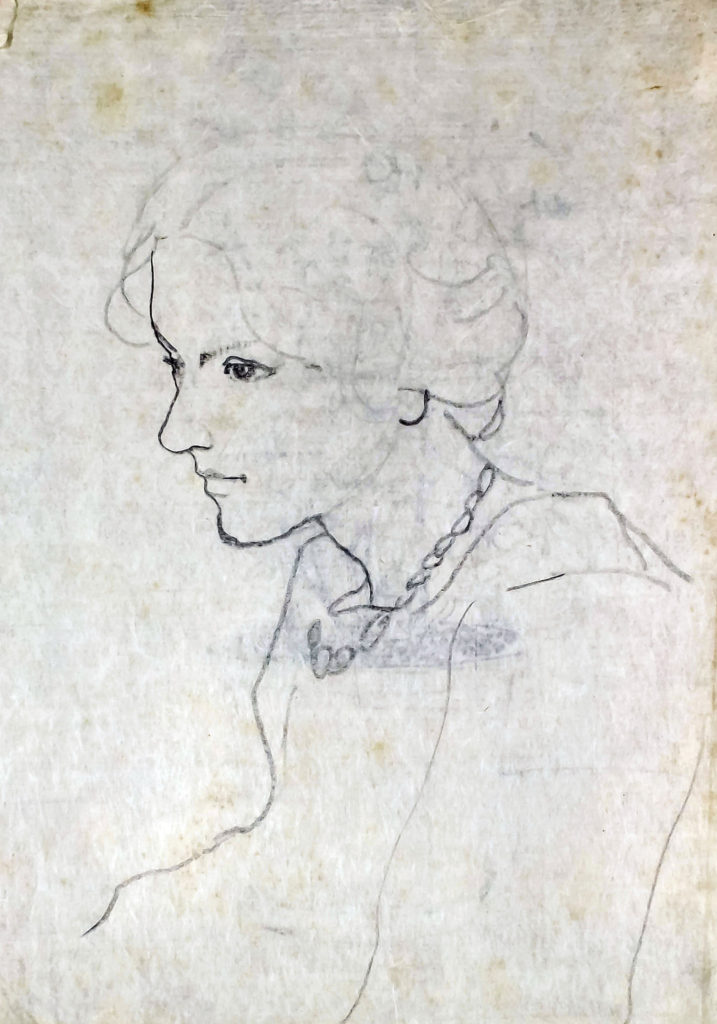 lots was a group of six pencil half-length portraits one of a woman, possibly Macke’s wife Elisabeth Erdmann-Macke, another of a man reading and two studies of a dog, one of a bird and a still life of a pot of flowers, are signed in pencil and dated ’07. They sold to the continental trade for £2,000.

Other top sellers at the sale were:

A late 19th century continental majolica study of a buzzard standing on a rocky base clutching its prey. Unmarked but impressed “863”, the 40.64cm (16ins) high model sold for £3,400, despite some damage. 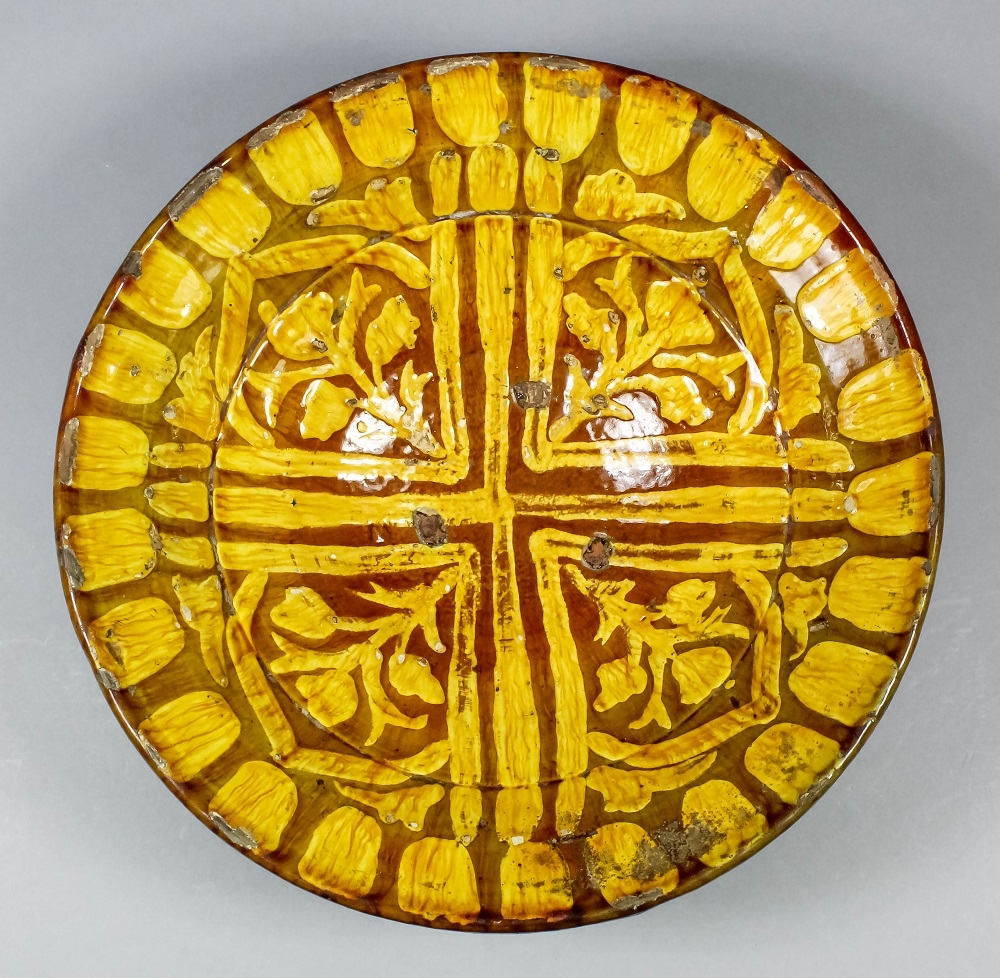 An 18th century circular slipware dish, the interior decorated in cream with a tulip design on a quartered ground, the exterior with green lead glaze. It sold for £3,000 against an estimate of £200-300.

An 18th century mahogany longcase by John Silke. The clock had a 12-inch arched brass dial with wide chapter ring, subsidiary seconds dial and date aperture, the arch now with a rocking figure of Father Time and the words “Tempus Fugit”, while the case’s hood had later brass ball and eagle finials. It sold for £1,250.

A collection of walking sticks and canes raised a total of £4,030, boosted by the inclusion of a Maori stick set with the South Seas abalone shell and carved with two tiki figures and linear and swirl decoration.

A Victorian “Penny-Farthing”, more correctly called “The Humber”, a black japanned ordinary bicycle metal by Thomas Humber & Co, Beeston Works, Nottingham. It was purchased by a private Cornish collector for £3,300.