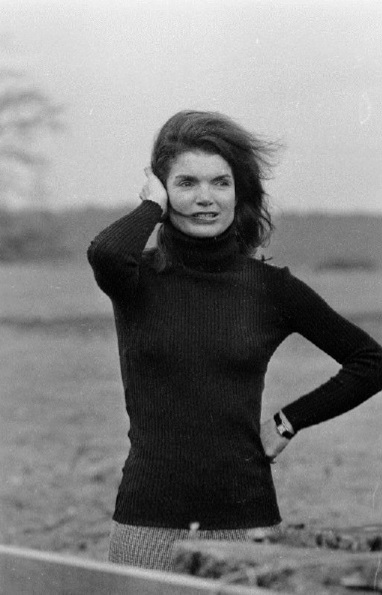 Jackie wore the Cartier Tank for decades, and it can be seen on her wrist in many iconic photos from the era. The watch features the engraving: “Stas to Jackie 23 Feb. 63 2:05 am to 9:35 pm”. The times refer to the start and stop times of the famous 50-Mile Hike in Palm Beach in 1963.

The 50-mile hike was a short-lived fad in early 1963 when President Kennedy asked the American people to take on the mentally and physically gruelling challenge of walking the distance. His inner circle of family and friends were some of the first to attempt the hike, including his friends Stas Radziwill and Chuck Spalding who feature in an original painting of the event that accompanies the watch in the sale.

The painting was a gift from Jackie to Stas Radziwill, and featured the dedication “February 23, 1963 2:05 am to 9:35 pm / Jackie to Stas with love and admiration”.

The watch and the accompanying painting, previously unknown to the public, are considered two of the most important historic artifacts to surface in recent years from the golden era of the Kennedy Presidency.

John Reardon, International Head of Christie’s Watches, said, “The Jacqueline Kennedy Onassis Cartier Tank is a watch full of emotion, love and history. Together with Jackie’s painting, these two objects capture the spirit of another era, a time where friendship and the “can-do” optimism of the generation seemed to make anything possible. In this spirit, the consignor has offered to donate a portion of the proceeds to the National Endowment for the Arts. Christie’s Watches proudly offers this truly iconic timepiece and painting on June 21 in our New York Rockefeller Center Saleroom.”