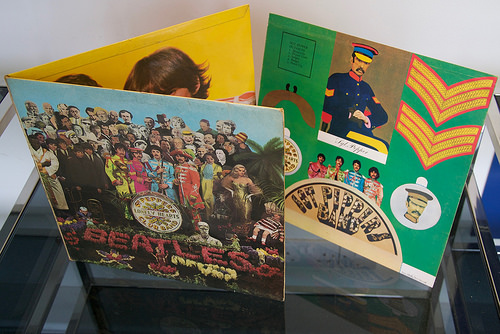 A vinyl version of The Beatles’ classic Sgt. Pepper’s Lonely Hearts Club Band that was saved from being dumped at the tip should have bidders in a spin when it comes up for sale at Moore Allen & Innocent in Gloucestershire next week.

The legendary album, which celebrates its 50th anniversary next month, has an original sheet of card tucked inside the sleeve that is printed with images which fans were invited to cut out.

Also within the collection is a copy of the band’s The White Album because of its blank sleeve. This version is the top-loader stereo version, complete with embossed Beatles logo, lyrics sheet, four portrait set of the band members, and stamped number – in the 41,000s. Millions of copies were pressed, making this a fairly early one.

The collection also includes classics by Bob Dylan, Queen, Cat Stevens, Jethro Tull, and the Hair soundtrack. The entire collection of around 100 LPs carries a estimate of £50 to £80 – not bad, considering each of the Beatles albums retail at between £15 and £30 on the collectors’ market.

The sale takes place on May 26.