A rare map that depicts one of the most humiliating defeats suffered by the Royal Navy in British waters is to appear at the London Map Fair next month – almost 350 years to the day since the infamous Dutch raid took place.

Little remembered today, the Raid on the Medway in June 1667 brought about the end of the Second Anglo-Dutch War, a bitterly fought conflict over control of the seas and trade routes. 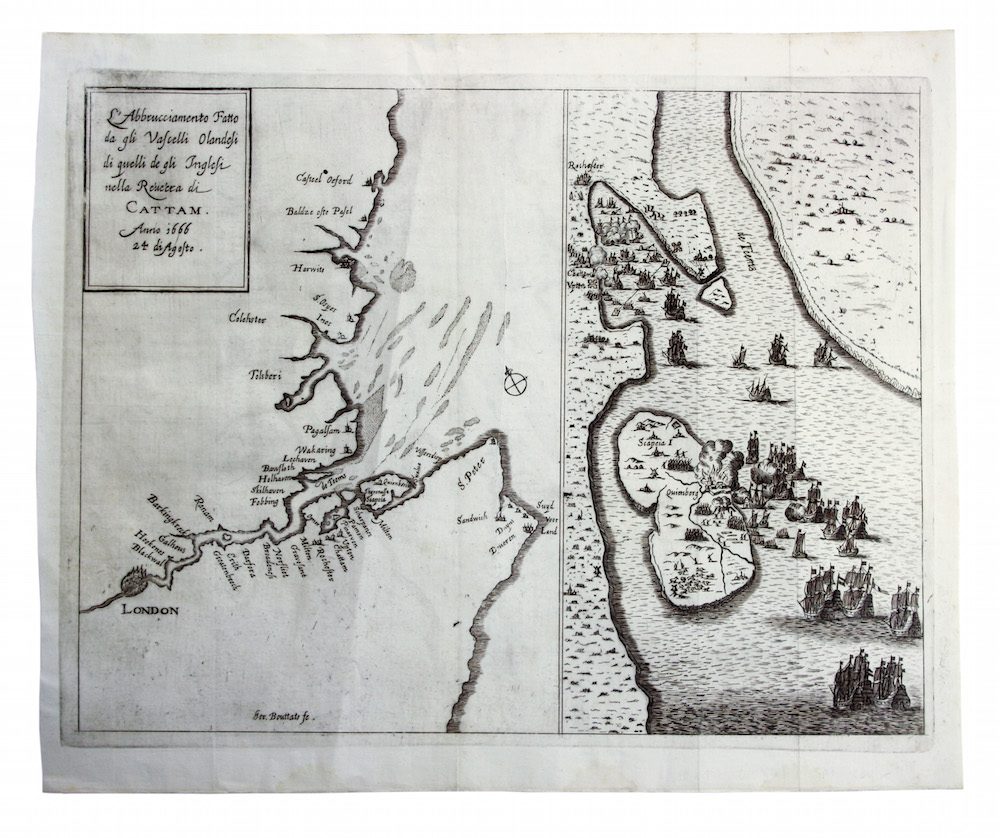 The raid came after the British victory to control the Channel almost a year before on July 25-26, known as the St James Day Battle, and a devastating raid on Dutch shipping – Holmes’s Bonfire – on August 10-20.

Despite these triumphs, time and money were not on Charles II’s side following the Great Plague and the Fire of London. The fleet was laid up in The Medway with skeleton crews, close to the mouth of the Thames, and was poorly defended. Despite unfavourable winds the Dutch were able to plan a tactical advance and capture the fort at Sheerness on June 10, 1667.

Late in the day, the British stretched an iron chain across the river at Gillingham to block the raiders’ progress, but the Dutch were able to break through it on June 12 before going on to destroy or capture shipping, using a terrifying fleet of fire ships.

The following day the Dutch made their way up the Medway, burning and capturing more ships, while forcing others to run aground to avoid destruction. The Dutch then turned tail and sailed to the mouth of the Thames, blockading London and only retreating just over two weeks later when hoped-for support from the French did not arrive and it had become clear that the British had reinforced their defences.

Such were the military and political humiliation that Charles II was forced to sue for peace by the end of July, but five years later the two sides were back at war.

Now the map will be shown at the London Map Fair – the world’s largest event of its kind – on June 17-18, almost 350 years to the day since what is still seen as one of the worst military defeats ever suffered by the British.

West End book and map dealer Tim Bryars will display the two-part map, which on the left-hand side shows London, the Thames Estuary, north Kent and South Essex coasts, while on the right details the invasion of the Medway, and the bombardment and occupation of the Isle of Sheppey.

Drawn by the Flemish engraver G. Bouttats and probably printed in Vienna, the map carries the wrong date for the battle, listing it as 24th August 1666, and carrying the Italian legend: L’abbrucciamento fatto dagli, vascelli Olandesi di quelli de gli Inglesi nella réuéera di Cattam anno 1666 24 di agosto, which translates into English as ‘The tussle by Dutch ships against those of the English in the Chatham reef.‘

“The Dutch bombarded Sheerness, occupied the Isle of Sheppey for several days, and burned anything which was not worth looting,” says Bryars. “The Dutch fleet sailed further up the River Thames to Gravesend, and up the Medway as far as Chatham, burning or capturing many of the Royal Navy’s most powerful vessels, including the flagship Royal Charles.”

He continues, “I know of only one other example of this map, which is in the British Library. It suggests Vienna as the place of printing, which is by no means unlikely as Italian was widely spoken at the Habsburg court and explains the inscription here. However, Gaspar Bouttats was a Flemish engraver, active in Antwerp, and this may be engraved after a Flemish original.”

A copper engraving, it measures 33.5 x 43.5cms and will be on display on the Bryars & Bryars stand at the London Map Fair at the Royal Geographical Society in London.

Over 40 dealers from the UK, Europe and US will be at the fair offering a wide variety of other rare maps.