A bag that was used to collect lunar rocks by Neil Armstrong during the Apollo 11 mission, which landed the first two humans on the Moon, is coming up for auction at Sotheby’s New York. 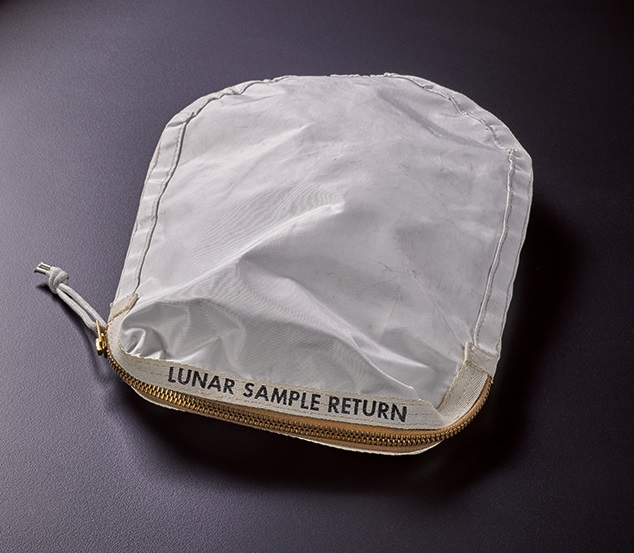 Sotheby’s is hosting its inaugural Space Exploration-themed auction on July 20, the first since its groundbreaking Russian Space History sales of the 1990s.

The auction house says that in the intervening decades, enthusiasm for objects from the heyday of space exploration has greatly increased, and the collecting field in both America and Russian material has dramatically grown.

Timed to coincide with the anniversary of the Apollo 11 lunar landing with a live sale taking place on 20 July, there will be a wide variety of material from both the American & Soviet space programs, from flown mission artefacts and hardware, items from the personal collections of astronauts and cosmonauts, space photography and signed photographs, maps & charts, signed books, engineering models and other 3-D objects.

However, the star lot of the sale is one of the most important space exploration artefacts to ever come to market: the outer decontamination bag used by Neil Armstrong on Apollo 11 to bring back the very first samples ever collected of the moon,­ traces of which remain in the bag.

The bag was lost for decades, until it was discovered in 2003 in the garage of Max Ary, who managed the Cosmosphere Space Museum and Research Center in Kansas. Ary was charged for stealing space artefacts and sentenced to 36 months in federal prison. The bag was returned to the U.S. government – who once again, lost it.

It was mislabeled as an item from the 1972 Apollo 17 mission, as reported by Ben Guarino. The value dropped due to the mislabel, as sample sacks from Apollo 17 weren’t used to collect moon rock.
A Sotheby’s spokesperson said, “The true history of the bag went unknown for decades until just a year ago. [The bag] was offered three separate times in 2014 by a small auction house on behalf of the US Marshall’s service, garnering not a single bid. It was relisted again in 2015.”

In 2015, Nancy Carlson, who consigned the bag to Sotheby’s for the auction this July, bought the bag at auction for $995. In order to have her purchase identified, Carlson went to the Johnson Space Center in Houston. Here, it was confirmed they were in fact part of the Apollo 11 mission.

NASA kept the bag, which led Carlson to seek legal action to have returned. Carlson was successful, and the bag was returned to her this February. It has been estimated to sell for up to $4 million.