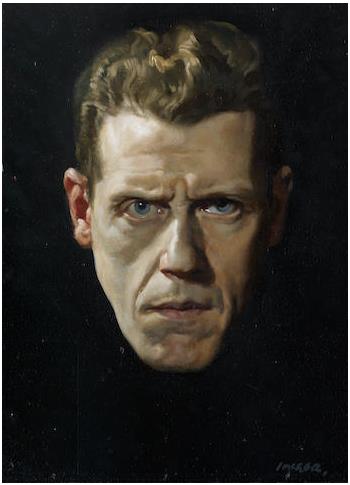 David Jagger’s piercing Self-portrait set a new world record for the artist at Bonhams Modern British and Irish Sale this week, achieving an exceptional £221,000 against an estimate of £20,000-30,000.

Matthew Bradbury, Bonhams Director of Modern British and Irish Art said, “Today’s sale reflects the market’s growing interest in and demand for works by home-grown artists. To once again set a world record for a work by David Jagger, particularly with a such a striking portrait of exceptional quality, is a wonderful result.”

Demand for the Yorkshire artist’s work has soared in recent years, demonstrated in the excited bidding between bidders online, on the phone and in the room for Jagger’s self portrait. In the event, it was a battle between three bidders on the telephone.

Previous works of Jagger’s that have sold at Bonhams include The Conscientious Objector, 1917, Jagger’s personal anti-war protest, which sold in 2015 for £115,300 and his 1939 painting The Young Golfer (Portrait of Ms. Joyce Rigby) which achieved £137,000 at Bonhams in November 2016.

Elsewhere at the auction, Algernon Newton R.A.’s serene Sunset, Hove, doubled its high estimate, achieving £100,000 against an estimate of £30,000-50,000. One of the finest works by the artist to come to auction, the sale marked the painting’s return from the US to the UK for the first time in 89 years.

The sale took place on June 14.