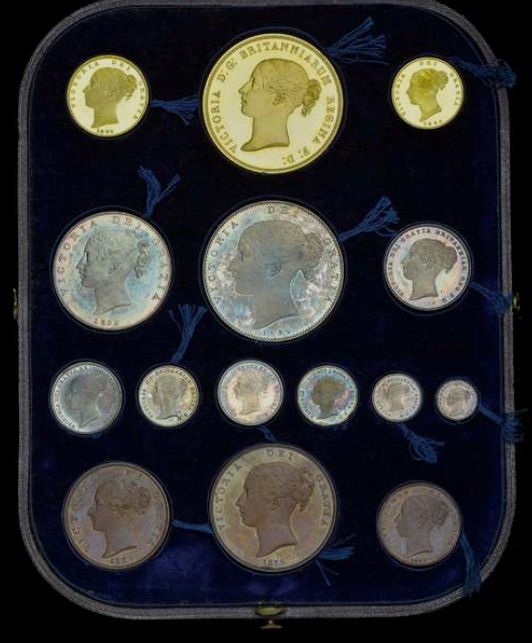 A rare proof set of what are arguably some of the world’s most beautiful coins is expected to fetch £200,000 to £250,000 at an auction of Coins and Historical Medals to be held by Dix Noonan Webb, the international coins, medals and jewellery specialists in September.

The 1839 British proof set of 15 coins bearing the ‘Una and the Lion’ design is in virtually mint state and is housed in its original contemporary fitted case.

It comprises a Five Pounds, with the ‘Dirige’ wording on the edge, a Sovereign, Half- Sovereign, Crown, Halfcrown, Shilling, Sixpence, Britannia Groat, Maundy set, Penny, Halfpenny and Farthing. The set, which is being sold by a private collector, is described as being “virtually mint state and brilliant, the gold with minimal hairlines, the silver with attractive light toning”.

Una and the Lion are characters in Edmund Spenser’s The Faerie Queene written between 1590 and 1611. The reverse of the coins designed by William Wyon depicts Queen Victoria as Una guiding the British lion. The design is an unusual one which has given the coins its familiar name of the Una and the Lion series. The obverse of the coins have William Wyon’s famous Young Head portrait of Queen Victoria. There is no evidence that these coins were ever struck for circulation. All the indications are that they were only intended to be proof coins and were primarily made for inclusion in the specimen sets of the first Victorian coins.

In March this year a magnificent example of the ‘Una and the Lion’ gold Five Pounds coin left its estimate far behind when it fetched £204,000 with buyers’ commission (£170,000 hammer price) at the sale of Coins, Tokens and Historical Medals held by Dix Noonan Webb in London. Bidding began at £95,000, towards the top end of its £80,000 to £100,000 estimate, and it was bought by a private collector bidding in the room against strong competition.

The sale takes place in London on September 13 to 14.