With prices ranging from £500 to £500,000 and above, sought-after pieces look set to appeal to both the established collector and first-time buyer alike. A unique stage that welcomes visitors from across the world, the fair blends eclecticism, artistry and hospitality in perfect measure.

We’ve pulled together just a few of the highlights that visitors can expect to discover. 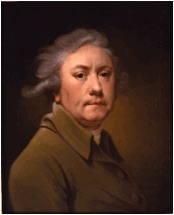 Purchased at auction in a sale of 18th century art, this painting was originally catalogued as being by a ‘Follower of Joshua Reynolds’. However, upon further research by Archie Parker from The Parker Gallery, it was revealed to be a genuine self-portrait by renowned British artist Joseph Wright. The discovery, a rarity for 18th century works by high-profile British artists, has been traced back to 1793, when records indicate that Wright gifted it to the Rev. Thomas Gisborne of Yoxall.

Gisborne was a close friend of Wright’s and had amassed an extensive collection of paintings and drawings by the artist, including a portrait featuring Gisborne and his wife, two landscapes of the Lake District (subsequently at Kedleston Hall) and a painting of Mount Vesuvius.

In 1793, Wright presented Gisborne with a self-portrait that had, until now, disappeared from view; its existence only known from a copy belonging to the collection of Sir John Crompton-Inglefield. A Latin inscription on the copy’s reverse reads: ‘Joseph Wright the artist presented this painting by his own hand as a gift to his friend T. Gisborne in the year of Our Lord 1793 and 59th of his age’. The newly discovered self-portrait is almost certainly the missing original that inspired the copy, and was later reproduced as the frontispiece of the 1885 monograph, The Life and Works of Joseph Wright A.R.A. commonly called “Wright of Derby”. Exhibited by the Parker Gallery 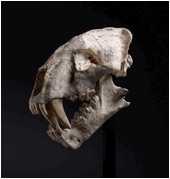 Often called ‘the king of the Sabre-tooths’, this unusually large and remarkably complete skull belongs to a ‘Machairodus Giganteus’ and dates from the Late Miocene, circa 5-10 million years ago.

A very rare find, this skull appears to the first sale of its type in the UK. The last similar example of any significance was sold auctioned at a Bonhams Natural History Sale in Los Angeles in 2011 and reached $116,500 (£90,061). Exhibited by Art Ancient 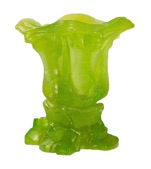 French glass company Daum is known as one of the major forces for innovative glassmaking from the Art Nouveau movement to the present. As part of its groundbreaking approach, Daum worked with famous sculptors, designers and painters to create limited edition sculptures. One such artist was Salvador Dali, who produced glass sculptures called ‘pâte de verre’ – an ancient glassmaking technique dating back to Ancient Egypt that gives a wax-like appearance to the glass – between 1968 and 1984.

Sylvia Powell will be exhibiting a six of these glassworks at the LAPADA Fair. In Dali’s typically surrealist style, the works are in a vivid colour palette of bright lime greens, blues, purples and aqua.

The glass will be exhibited alongside with some of the most famous photographic works of the artist. These will include the iconic image by Philippe Halsman originally published in LIFE magazine, which has been described as ‘the photo that changed modern portraiture’. The striking image is inspired by Dali’s ‘Leda Atomica’ and features an elaborate scene with a floating chair and in-progress easel suspended by thin wires. 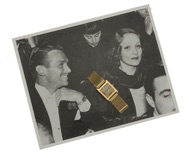 Featuring a two-tone ivory and gold dial with Roman numerals, adjustable 18ct gold mesh bracelet and back cover engraved with ‘D.F. JR.’, this 18ct gold gentleman’s wristwatch is from the estate of Douglas Fairbanks Jnr. The movement, case and dial are all signed by Patek Philippe.

The watch is accompanied by an image of Fairbanks Jnr wearing the watch in the company of Marlene Dietrich. He was in a middle of an affair with the German actress and singer when he met his future wife, Mary Lee Hartford.

Fairbanks Jnr began his career as an actor with Paramount pictures when he was only 14 years old. He went on to star alongside greats such as Bette Davis, Greta Garbo, Loretta Young and Katharine Hepburn. When America joined the Second World War he was appointed special envoy to South America and was awarded the United States Navy’s Legion of Merit, the Italian War Cross for Military Valor and the British Distinguished Service cross amongst others.

Pierre-Auguste Renoir’s youngest son Claude was born when he was 60 years old. The birth of a new child brough joy and inspiration to his life and he deeply cherished his third son, spending hours capturing his cherubic likeness. Renoir’s nickname for his son was Coco.

In ‘Coco Ecrivant’ Claude is believed to be around six years old. Here he captures the child seemingly unaware writing or drawing in his sketchbook. The close proximity of artist to subject suggests an intimate and peaceful moment in the prescence of his son. Exhibited by MacConnal-Mason.

The work is signed by Renoir on the upper right and is dated to 1907.

A magnificent George III musical clock made specifically for the Ottoman market during the peak of English trade with the Ottomans.

It features a veneered turtle shell case decorated with entwined ormolu mounts and flanked by scroll corbels. The central pedestal supports a cylindrical tune selection dial with a flambeau finial above. This clock is the only known example of this design to feature a tune selector, in this case offering a choice of six tunes.

The main dial features chapters written in Turkish and is signed Marwick Markham and Borrell, London. The upper dial gives a strike/silent option.

Henry Borelll was a celebrated maker specialising in musical clocks, many of which were made for the Turkish market. Exhibited by Harold Walwyn.

Acquired by Lewis 1st Viscount Harcourt for his wife in 1900, this tiara is made from 18ct yellow gold and platinum and is set with fine white diamonds.

One of the first examples of a tiara made ‘en double’ with gold and platinum rather than gold and silver, the tiara can be detached from its gold frame and worn as a necklace. Exhibited by The Gilded Lily Jewellery Ltd. 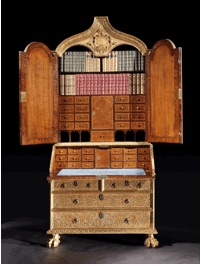 An exceptional George I giltwood secretaire cabinet is attributed to the Royal cabinetmaker, James Moore the Elder. Arguably one of the finest and most important surviving pieces of English furniture made in the Eighteenth century, the gilt-gesso cabinet was made for export to the Portuguese Court during the reign of King Dom João. The incredible craftsmanship of the cabinet suggests it was made for a noble if not royal patron, or perhaps even the king himself.

The gilt surface is carved and decorated throughout with gilt-gesso decorations, strap-work and foliage patterns. The walnut doors open to reveal a magnificent fitted interior with adjustable bookshelves, a fall front bureau and pigeonholes below a central arched drawer surrounded by small drawers. The cabinet also features an inset silk velvet writing area, an engraved brass lock-plate and boldly carved paw feet. From Mackinnon Fine Art.

A bronze statue of the goddess, Venus 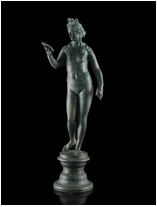 Immaculately preserved with original bronze stand, this Roman statue of the goddess Venus dates from the 3rd century AD. The goddess is stood in contapposto position with her left leg slightly bent. In her left hand she holds an apple and in the right a mirror which she is tilting her head towards. Her long hair, which falls over her shoulder in curcls, is arranged in a High Classical manner with the bow she wears in many of her likenesses, most notably the Aphrodite of Knidos. Her proportions likely coincide with the High and Late Classical 1:7 or 1:8 canon.

Of excellent quality, the statue is modelled on Greek examples of the 4th century BC, and features the visible influence of the Classical period in Greek art. The statue is in extremely fine condition, with a deep green patina covering the entire surface. Exhibited by CJ Martin Coins Ltd and Ancient Art. 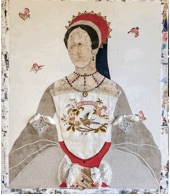 Initially a painter of nature studies in watercolour, Madrid-born Maira Torroba has recently shifted her focus to imagery of the Renaissance, the golden age of Spain and other European nations.

Drawing on the traditions of portratiruee from the 15th, 16th and 17th centuries, Torroba has embraced textile media by juxtaposing oil paint with fabric collage. Her works incorporate Spanish and Belgian linens, antique lace embroidered by her grandmother, ribbons, hessian, shells, jewellery and papers that reference both Renaissance motifs and contemporary media. Exhibited by Rebecca Hossack. 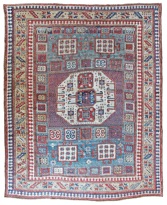 This bold and vivid Karachov Kazak rug was woven in the Caucasus mountains in Azerbaijan by Armenian weavers. Also known as “Karachopf”, these tribal weavings were made using soft wool on a woollen foundation, giving them a light feel to touch.

This example was woven around 1870-1880 and uses rare green natural dyes along with an interesting yellow border. The colour palette is much rarer than the younger blue and reds. It features a geometric pattern, four latch-hook motifs on each corner and a white central motif, designs typical of rugs from this region.

Woven by semi-nomadic shepherds of the regions, the rugs use vegetable dyes and hand-spun wool from the weaver’s own herds. In excellent condition, the pile is high throughout, it features no marking or staining and has had minimal professional restoration. Exhibited by Farnham Antique Carpets.