Rare and exceptional items of Worcester porcelain went under the hammer recently at Exeter auction house Bearnes Hampton & Littlewood, with eleven pieces included in the sale from the collection of the late Dereck O’Donoghue.

Dereck O’Donoghue was an antique dealer who ran a shop in Torquay in the 1960s and 1970s and who was also one of the founder members of BADA (British Antique Dealers Association). The second and final part of the collection to be sold at Bearnes Hampton & Littlewood’s Exeter salerooms comprised possibly the best examples of the Flight & Barr factories.

The highest prices of the day went to the rare orange ground triple spill vases with the more popular shell decoration selling at a hammer price of £17,000 in comparison to the feather decorated example which fetched £15,000. A single orange ground jardinière with shell decoration also sold for £7,400. The collection included several pieces with the equally rare marbled ground, such as the honey pot and cover and oval teapot with cover. Both decorated again with shells and seaweed they sold for £4,100 and £4,300 respectively.

Here is a round-up of the top-selling lots: 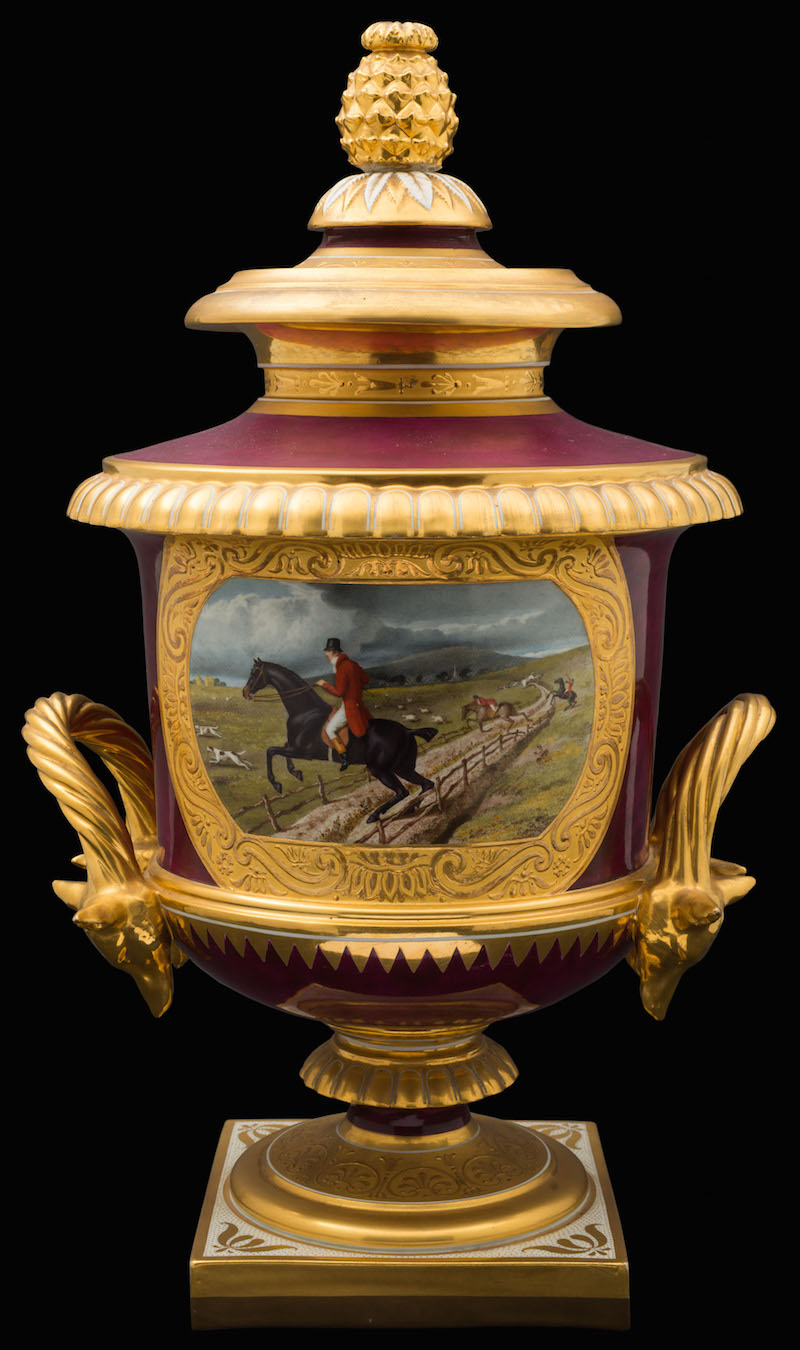 A large Flight Barr & Barr two-handled vase and cover: the centre vase from a ‘Hunting’ subject garniture, of campana form with pineapple finial and rope-twist fox head handles, painted on each side with a hunting scene titled “Swishing at a rasper” and “Going in and out clever” reserved on a claret ground, script marks “Flight, Barr & Barr/Royal Porcelain Works, Worcester/London House 1,Coventry Street”, circa 1830, 51 cm high. Sold for £8,900. 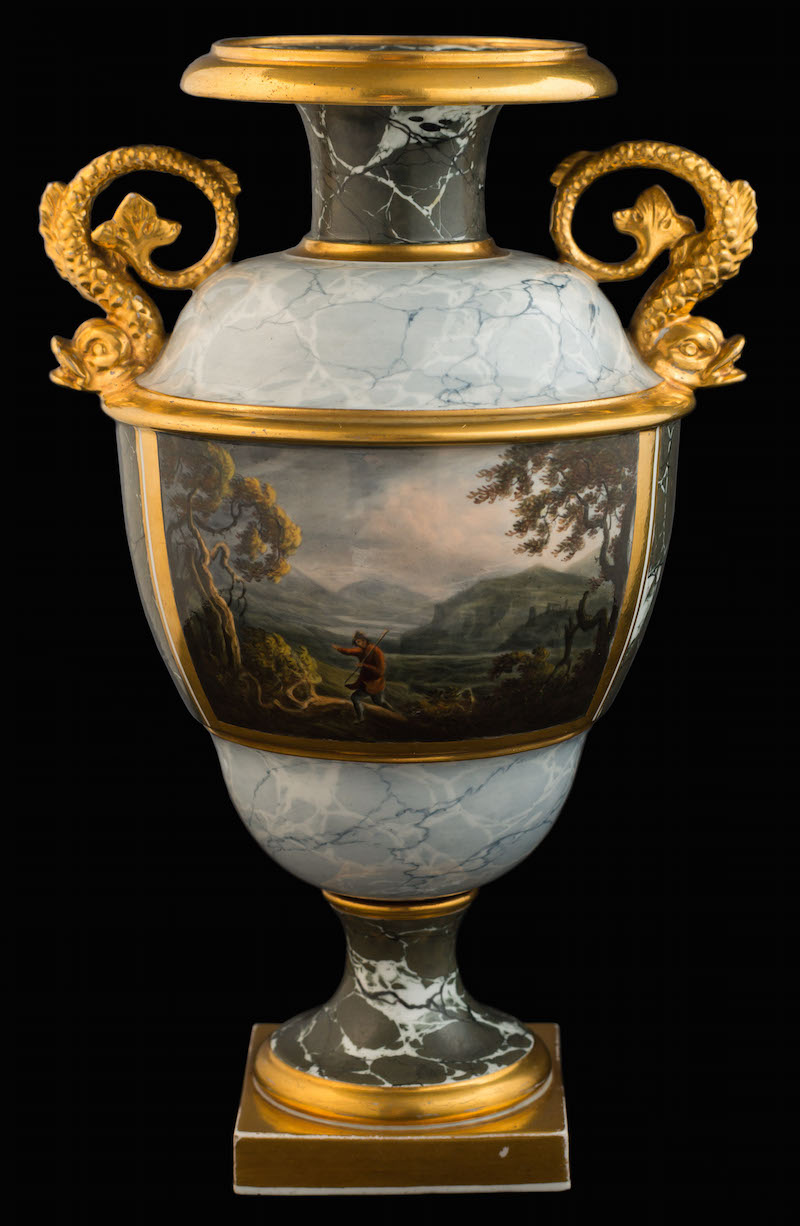 A Barr Flight & Barr two-handled vase: of ogee form with flared rim and dolphin handles, painted with a traveller holding a staff in the foreground of an extensive lake landscape reserved on a light and dark grey faux marble ground, script marks in red with reference to Royal patronage, circa 1805-10, 27 cm high. Sold for £4,300. 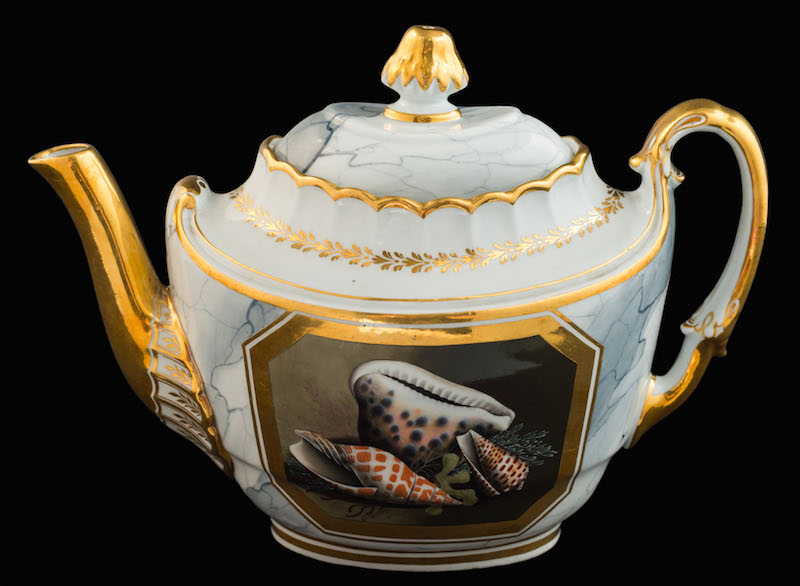 A Barr Flight & Barr oval teapot and cover: with fluted rim and double scroll handle, the cover with bud finial, finely painted on each side with shells and seaweed within solid gilt octagonal panels on a faux marble ground, incised B mark under cover and script marks with reference to Royal patronage, circa 1805-10, 17 cm high [two small chips to flange of cover]. Sold for £4,300 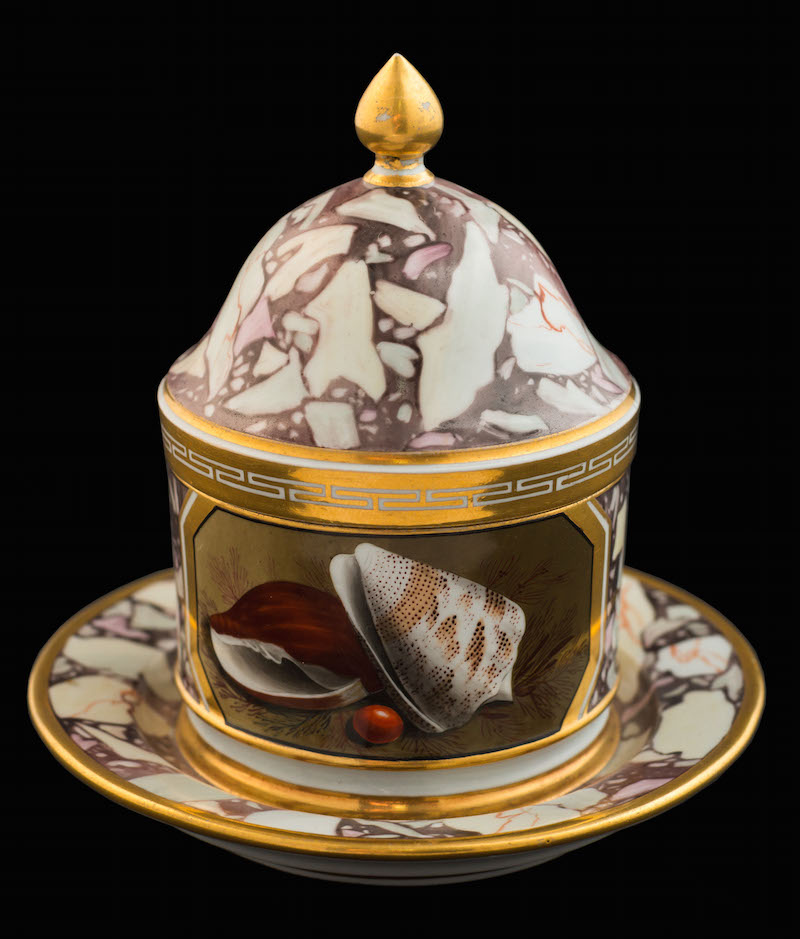 A Barr Flight & Barr honey pot and cover: of circular form with domed cover and pointed finial, painted with a panel of shells and seaweed reserved on a cream, pink and purple marbled ground, script mark with Coventry Street address and reference to Royal patronage, circa 1805-10, 12 cm high [finial re-attached]. Sold for £4,100 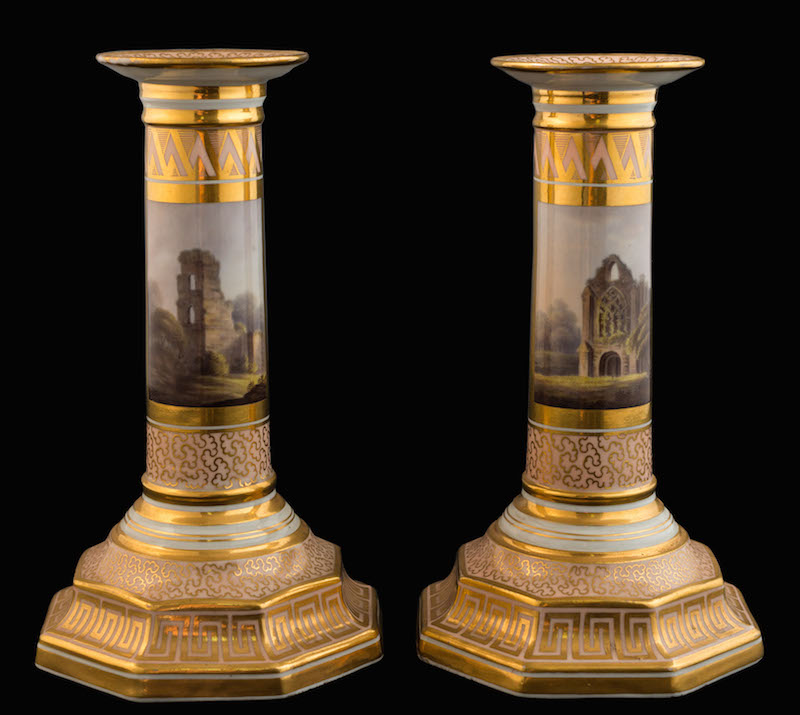 A pair of Barr Flight & Barr ‘Music’ candlesticks: of pillar form on octagonal bases, painted with ruins in landscapes within solid gilt borders on vermiculi and key fret gilded pale salmon pink grounds, inscised B and script marks of Barr, Flight & Barr Worcester and Flight & Barr London and details of Royal patronage, circa 1805-10, 17.5 cm high [minor wear to gilt on one sconce]. Sold for £4,300 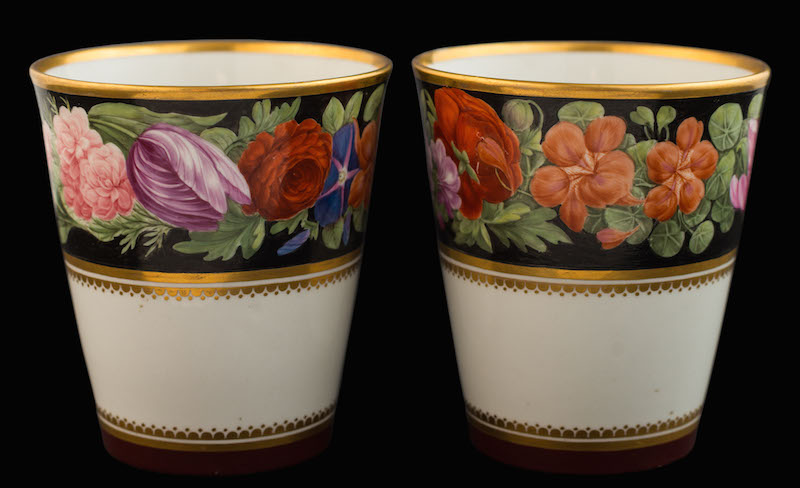 A pair of Flight & Barr beakers: of flared conical form, each finely painted with a band of full blown flowers and foliage on a black ground within gilt borders, the footrim with a chocolate brown band, incised ‘F&B’ and crowned script marks ‘Flight & Barr Worcester/ Manuf. to their Maj.’, circa 1800, 10 cm high. Sold for£1,450 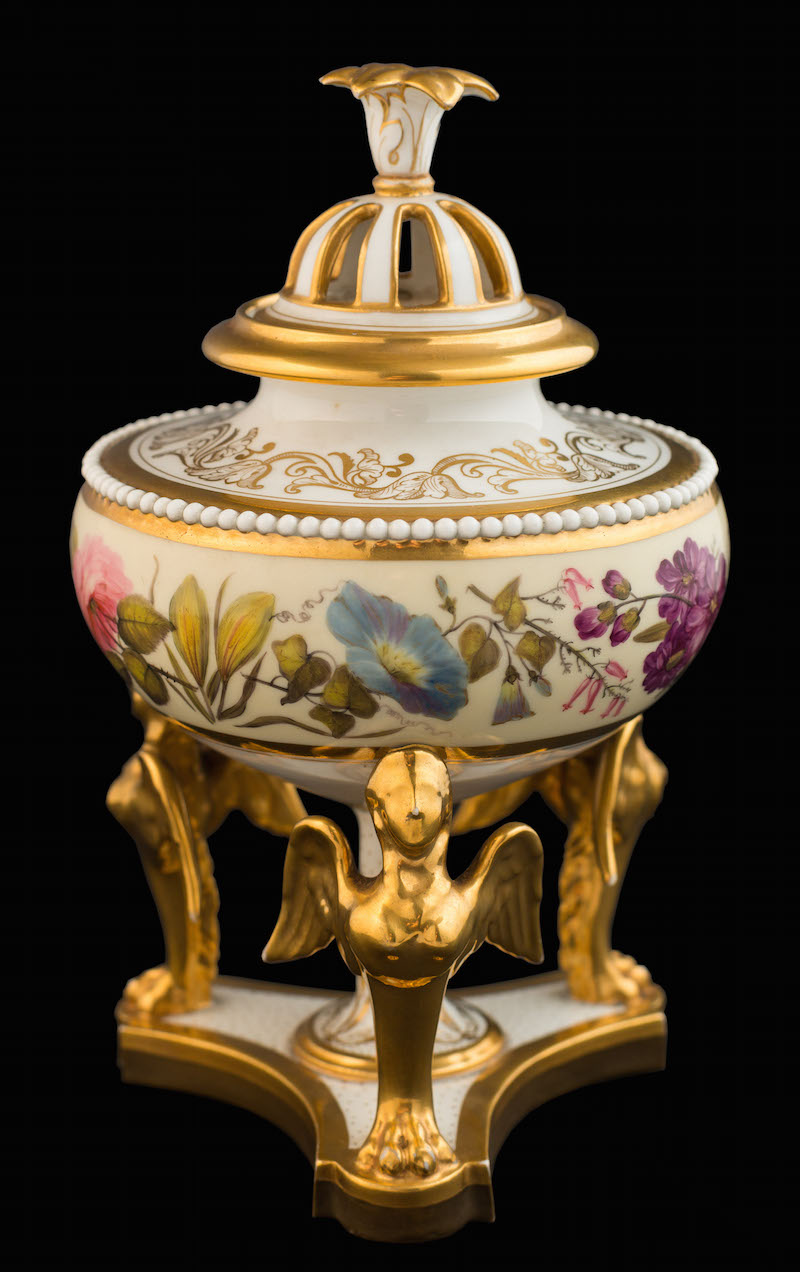 A Flight Barr & Barr pot pourri bowl and cover: the pierced cover with finial in the form of overlapping leaves, the globular body with beaded ‘pearl’ band and painted with a continuous panel of flowers and foliage on a pale yellow ground, on gilt winged sphinx supports and triform base, impressed mark, circa 1815-20, 18.5 cm high [finial with small chip and re-attached]. Sold for £1,100 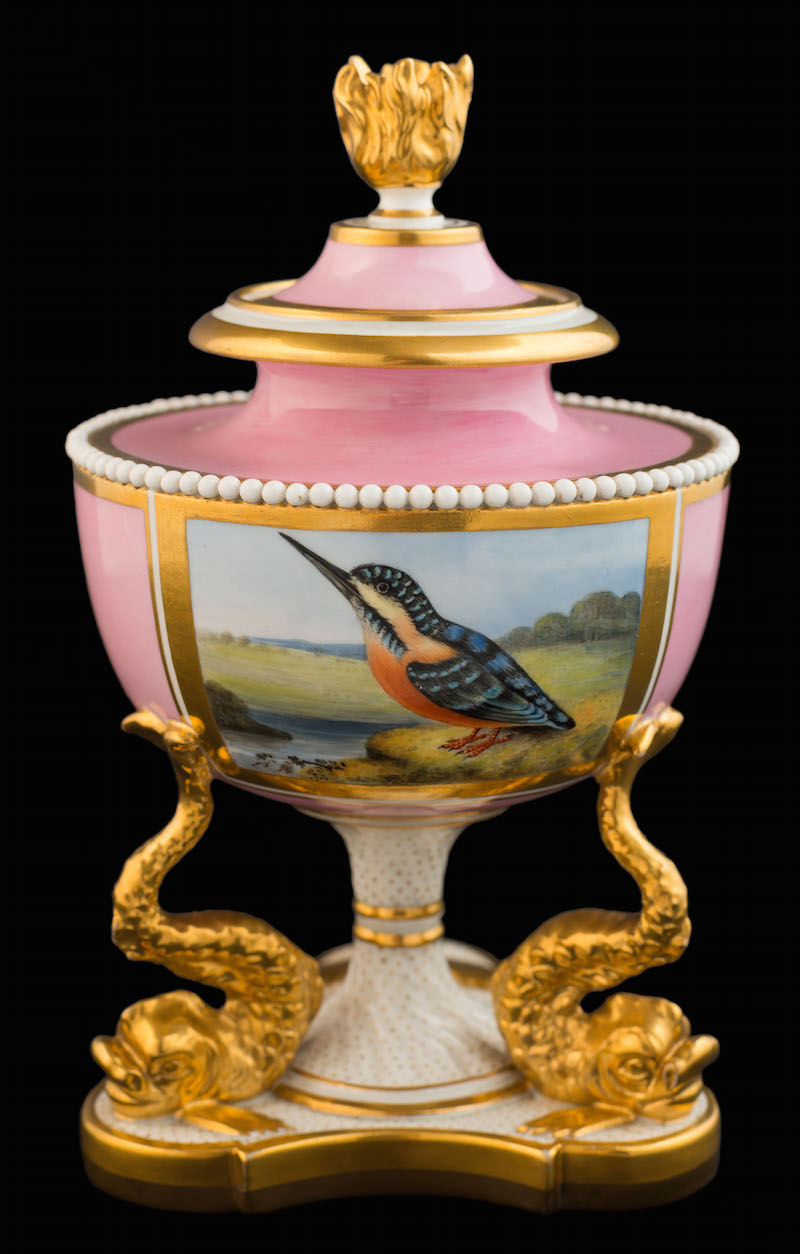 A Flight Barr & Barr vase and cover: with flambe finial, beaded ‘pearl’ band around the shoulder and on gilt dolphin supports, painted possibly by William Doe with a kingfisher in a river landscape reserved on a pink ground, the triform base with a ground of gilded dots, script marks with title ‘King Fisher’ and London House/Coventry Street address, circa 1815-20, 18.5 cm high [tiny chip to finial]. Sold for £5,400 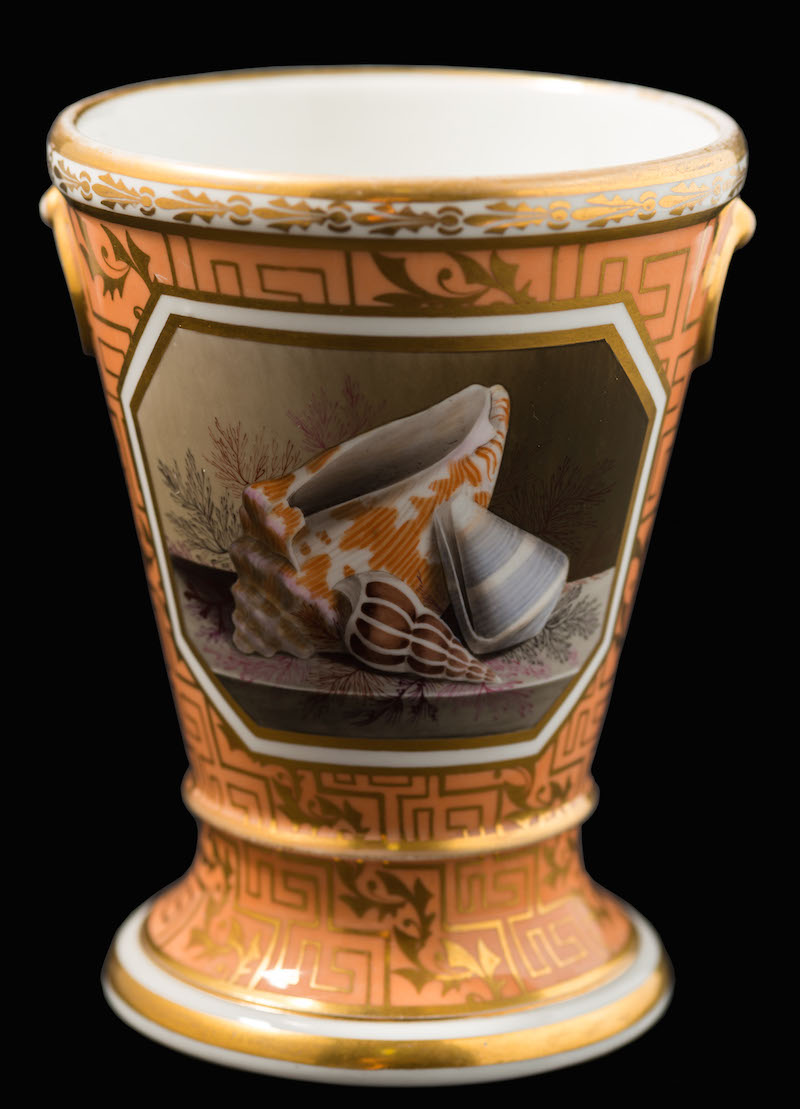 A Flight & Barr orange ground jardiniere: of trumpet form with gilt false ring handles, painted with a panel of shells and seaweed on a marble ledge, the ground with fret and foliate gilding, elaborate script mark for Flight & Barr with Coventry Street address and Barr Flight & Barr Worcester with reference to Royal patronage, circa 1805, 16 cm high [minor wear to gilt rim]. Sold for £7,400 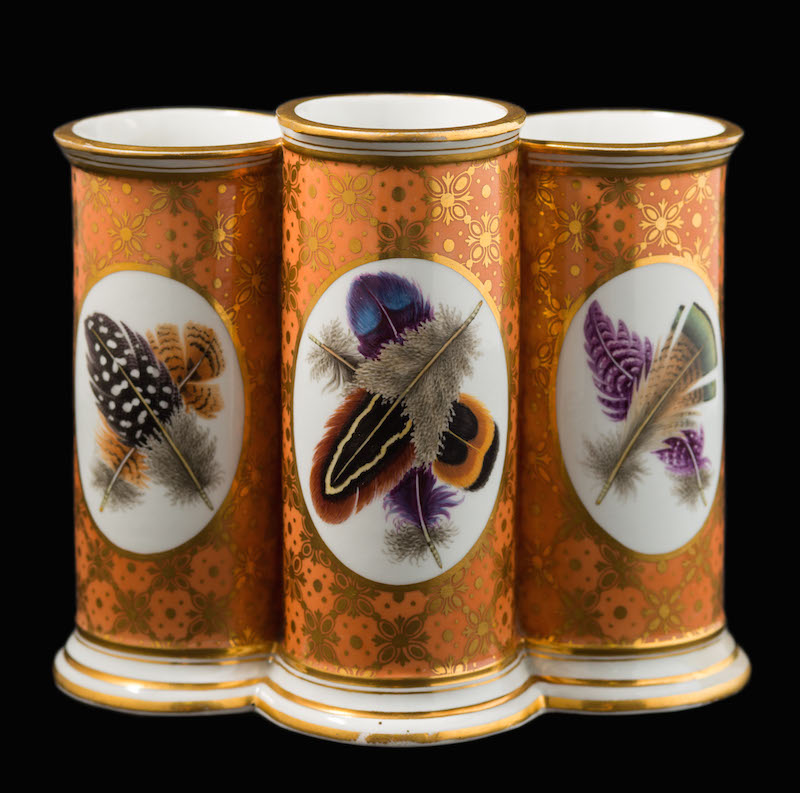 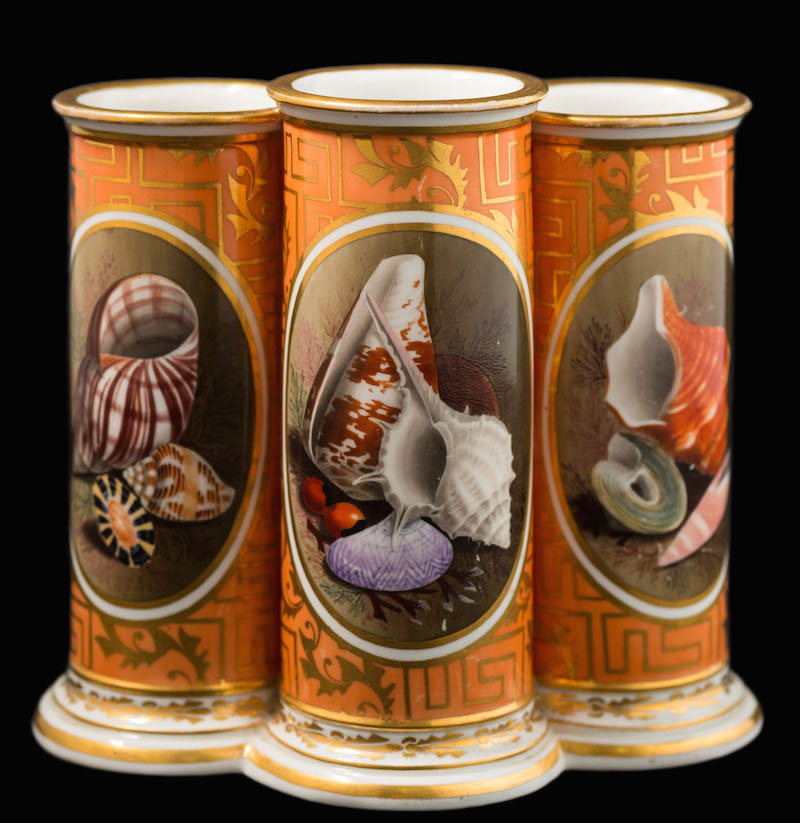 A Barr triple spill vase: the three conjoined cylindrical vases finely painted with oval panels of seashells and seaweed on a fret and foliate gilded orange ground, incised B mark, circa 1800-05, 14.5 cm high [minor wear to gilding on rims]. Sold for £17,000