A collection of vintage posters from WWI and WWII, set to be sold in New York next month, reveals how methods of propaganda shifted during the intervening years.

The specialist sale at Swann Auction Galleries on August 2 brings together a fascinating selection to illustrate this as it marks the centenary of America entering WWI.

The evolution in poster design shows how British and US posters from the first conflict focused on the call to arms, patriotism and the heroic fight for justice in service of empire, while those from 1940 and beyond tended to highlight the contribution the ordinary civilian could make to the war effort.

Among the rarer British offerings from the early days of WWI is Lucy Kemp-Welch’s Forward! / Enlist Now from 1915. An almost forgotten artist today, Kemp-Welch was well known in her time for producing the horse illustrations for the novel Black Beauty. In 1914 she became president of the Society of Animal Painters and was commissioned by the Imperial War Museum for war work, starting in December 1914 with a project for the British Parliamentary Recruiting Committee to paint the artwork for this famous army recruitment poster, which she signed L.K.W 1914. The estimate is $3,000 to $4,000 (£2300 to £3060). 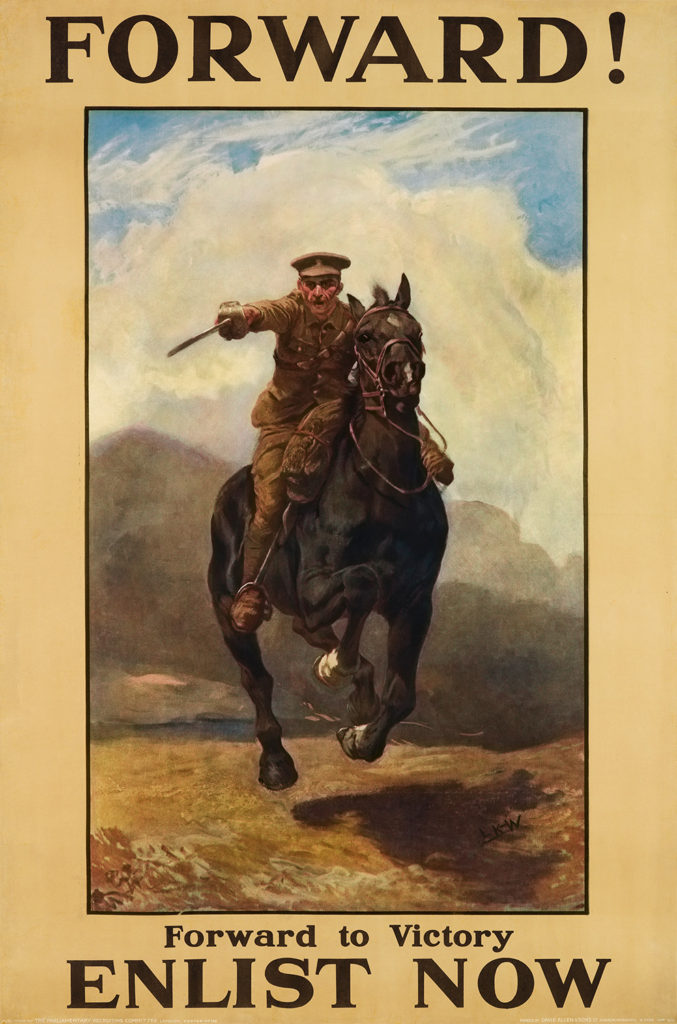 Addressing the subject in a similarly heroic vein, Sir Bernard Partridge, who had become chief cartoonist for Punch in 1910, designed Take Up The Sword Of Justice around the same time. His war posters can be seen in public collections, including the State Library of Victoria. The estimate is $700 to $1,000 (£535 to £765), which is also the guide for Arthur Wardle’s The Empire Needs Men! / Enlist Now, from 1915. 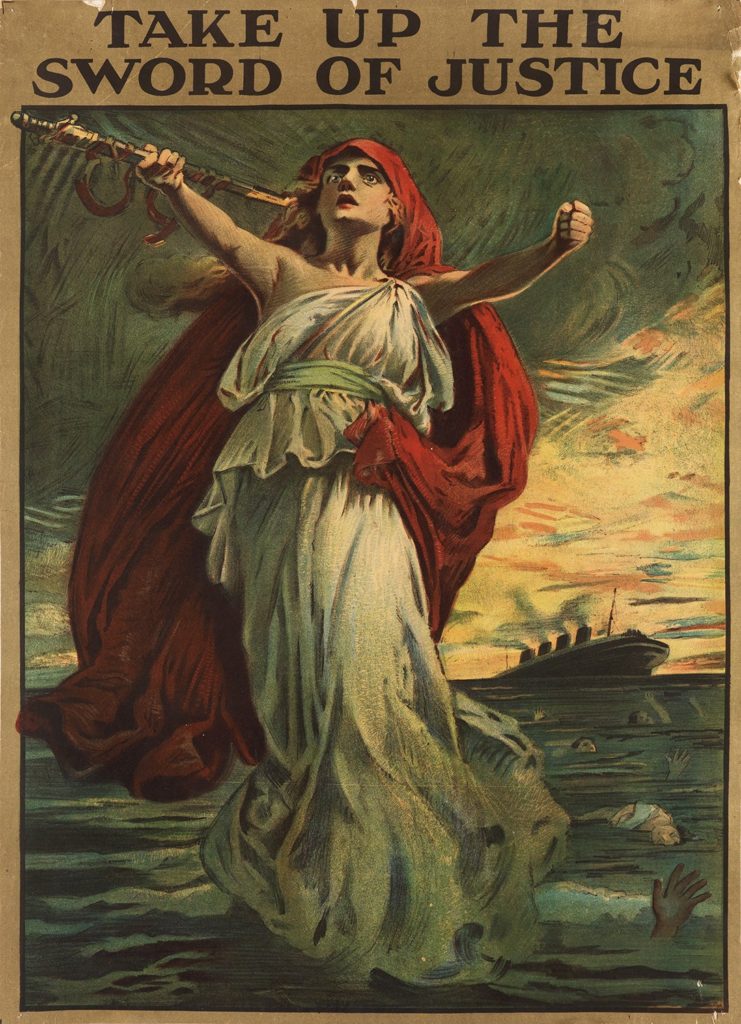 When the United States shed its reluctance to join the fray in 1917, it made up for lost time with an equally forceful clarion call, most notably in this personification of Uncle Sam, by James Montgomery Flagg. Echoing the Lord Kitchener Wants You recruitment poster by Alfred Leete from 1914, Uncle Sam’s direct appeal to middle America had the desired effect.

Flagg himself was reputedly the model for Uncle Sam, looking out from one of the more than four million copies that were printed as part of the recruitment drive to make it the most famous poster in the world in its time. Flagg created a total of 46 works in his contribution to the war effort, but this was by far the most popular and was revived and adapted for use in the Second World War. The estimate is $7,000 to $10,000 (£5360 to £7660). 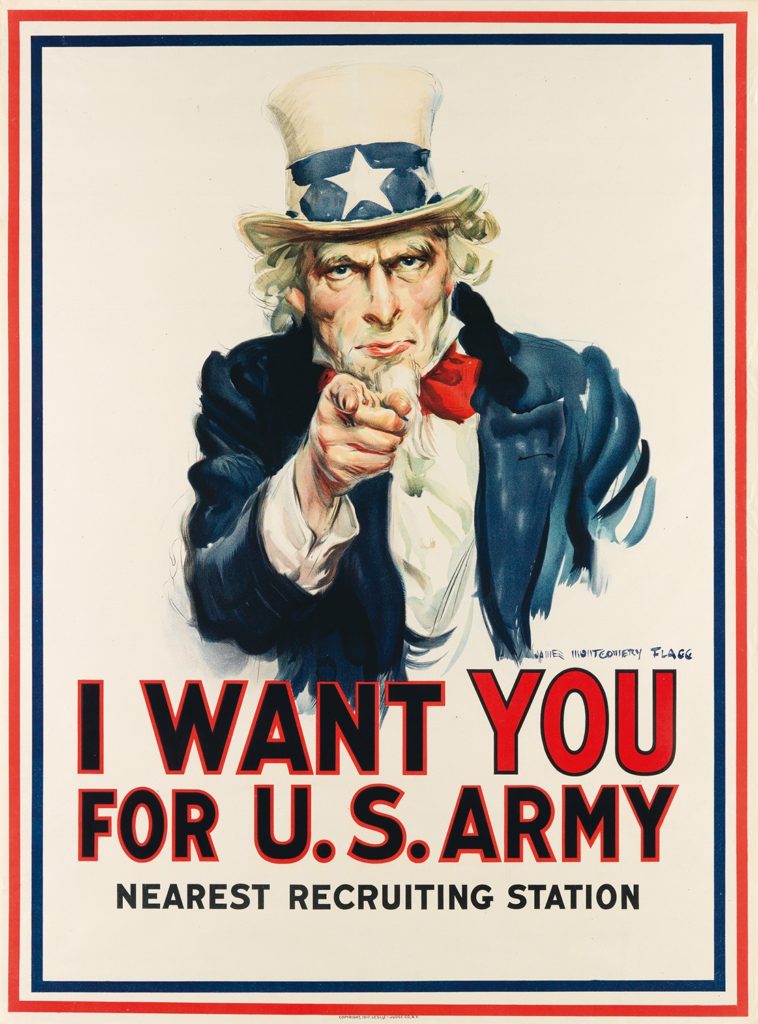 Contrast these trumpet blasts with what was to come 25 years later, when the public was far more aware of the horrors of war.

They Also Serve, a series of 1942 posters from London Transport in the Back Room Boys series by Fred Taylor, shows how every member of the public was doing their bit, such as a woman working in power control. Others included Traffic Control, Car Maintenance, Cable Maintenance and Boiler Maintenance. At Swann, a group of six such propaganda posters are lotted together with an estimate of $700 to $1,000 (£535 to £765).

Joining them with a price guide of $600 to $900 (£460 to £690) will be a group of five public information posters aimed at keeping the nation fighting fit, including Coughs and Sneezes Spread Diseases, by the inimitable HM Bateman.

Other themes in Swann’s Vintage Posters auction are Circus posters, colourful and vibrant advertisements for the thrills and spills of the Big Top. Examples in the sale include horses jumping over a flaming hurdle – from 1935, well before the days of animal rights campaigning – promoting Ringling Bros and Barnum & Bailey, an exciting addition to any wall at $600 to $900 (£460 to £690).

Carrying the same hopes is the rather more sedate Miss Rose Rieffenach, The Hungarian Queen of Equestrianism, another Ringling/Barnum & Bailey promotion, while another c.1935 design, Hagenbeck – Wallace 4 Paw – Sells Bros Combined Circus, claims to feature the daughter of Rasputin. Its estimate is $700 to $1,000.

Swann Galleries President Nicholas Lowry, a specialist on the US Antiques Roadshow, explains what makes the sale so interesting. “We have specialised in auctioning posters from the World Wars and propaganda posters for many years now (beginning in 2002 we separated them into their own section within our catalogues) and it is incredible now to have the selection that we are able to offer on the 100th anniversary of America’s entry into the conflict.”

He adds, “This sale will attract more history buffs and likely people who are interested in how propaganda was utilized in the eras long before social media.”