A glass bought for just 99p in a Derbyshire charity shop is expected to fetch up to £150 at auction, after being identified as by a famous Austrian designer. 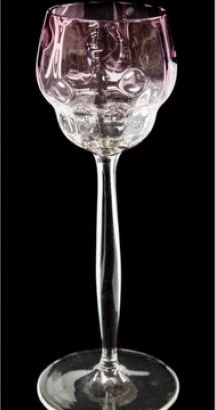 The elegant drinking glass was designed by Koloman Moser in 1900, according to Hansons Auctioneers’ decorative arts specialist John Keightley.

He said: “Our vendor bought the glass in a Derbyshire charity shop simply because he liked it. He was stunned when I told him it was by Koloman Moser, whose work is sought after. That means the glass could fetch between £100-£150 at auction.”

Moser was a designer of great importance as Mr Keightley explained: “Austria in the first quarter of the 20th century was a powerhouse of innovation, style and design, becoming famous for its own take on the Art Nouveau style, known as Secessionism.

“The Weiner Werkstatte, now regarded as one of the most collectible and pioneering movements throughout design history, was established by a pair of architects and designers, Koloman Moser and Josef Hoffmann, in 1903.

“Now world famous, the workshop, which closed in 1932, produced everyday objects including drinking glasses, metalware and ceramics for the style-conscious elite of Europe, in a time when simplicity and elegance was becoming increasingly popular.

The glass found in the charity shop is part of a famous wine service known as the Meteor set for its moulded bowl with convex lozenges and ridges. The bowl is pink fading to colourless and stands on a slender bowed stem.

The glass will be sold in a specialist Decorative Arts Auction at Hansons Auctioneers on October 24.

Mr Keightley added: “Glass of this sort is often overlooked, especially when dusty and jumbled together with mass produced domestic drinking glasses of the later 20th century. But a design as iconic as this jumps out as something special, especially when cleaned up and presented in a different context.” 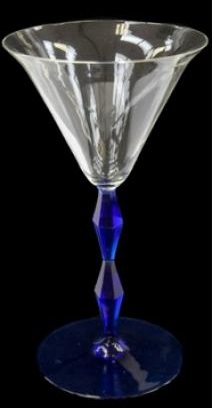 By pure coincidence, a set of glasses from the same era, this time designed by Josef Hoffman, have also just come to light at Hansons. John said: “The owner thought the glasses were probably worth around £80. They discovered they could add a nought to that figure – and they may fetch much more.

“That’s because the wine glasses, which have blue faceted stems, are a Josef Hoffmann design created at the time when the Wiener Werkstatte was most prominent from 1922-26.

“They are from a suite known as Bamboo Stem, which appears in a variety of different colours.

“To find a set of 11 glasses of a very usable size and in pretty good condition is remarkable. I have seen individual glasses of this design in sets of three or four but a matching set of this scale is unusual.”

John added: “Secessionism and the designs of Moser and Hoffmann is a highly collectible area of design. It was influenced by and shared ideas with the Glasgow School and the work of Charles Rennie Mackintosh. The Staffordshire ceramic firm of Minton even produced a range of vases and domestic ware around 1910-20 called Minton Secessionist ware, which is sought after today.”